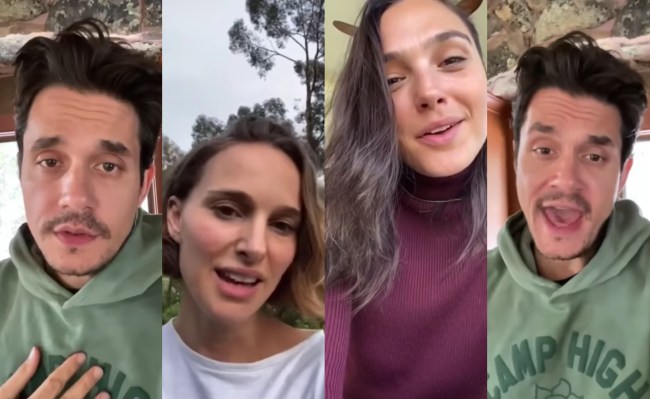 John Mayer brought a breath of fresh air to the Internet this week when he put on a master class in trolling. It was just a few days ago that A-List celebrities banded together to film that clip of ‘Imagine’ by John Lennon.

Gal Gadot was the mastermind behind the tone-deaf ‘Imagine’ video. It appears to have been a major catalyst in memes over the past few days pointing out how rough celebs have it during lockdown while chilling in their $10 million mansions with everything they’d ever need delivered straight to their doorsteps. Some of the people who appeared in that clip include Kristen Wiig, Mark Ruffalo, James Mardsen, Sarah Silverman, Jimmy Fallon, Will Ferrell, and others.

John Mayer addressed this on his Current Mood Instagram series where he spliced himself into the clip. The way John tells it, he thought he was supposed to be a part of the whole song but he “totally misunderstood the assignment” and sent in a clip of him singing Ariana Grande instead. John then re-cut the viral video with himself in it and the finished product is brilliant.

John Mayer is a national treasure and I’m not saying this just because I think his performances with the Dead & Company have been fucking phenomenal. His complete transformation Hollywood Pop Musician that dates celebrities to where he’s at now…all that stuff but also a really genuine person and he’s finally being appreciated for the phenomenal musician that he is. That has been one of the greatest glow ups in music over the past decade.