A Bunch Of Celebrities Sang ‘Imagine’ On Social Media, Inadvertently Made A Compelling Case For Extinction 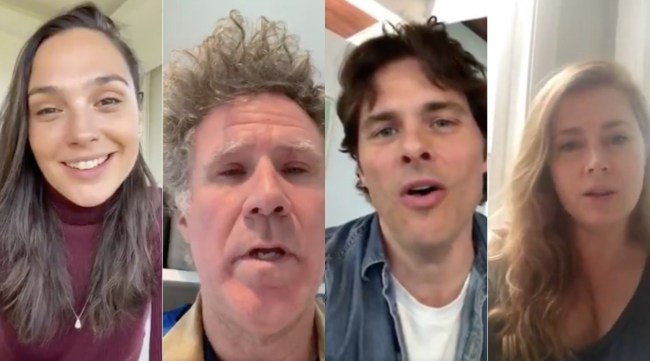 In general, I’m not one of those people who take umbrage with celebrities.

Yeah, the Jared Letos and the Gwyenth Paltrows of the world are legitimately unbearable tools, but overall, I find celebrities to be just like us, only vastly wealthier and prettier: at the end of the day, they’re trying to cut that check and bring it home to their family, and I can’t help but respect that. Plus, I fucking love movies — have literally made an entire career out of it.

Frankly, I’ve never understood people who complain about celebrities using their acceptance speeches to share their political beliefs. You don’t like it? Then ignore it or change the channel. Shocking, I know. And yet, there’s still an annoyingly large section of the population that will get their star-spangled panties in a bunch and take to Twitter to fire off phrases like “lib” and “cuck” until their eyes bleed.

But, all that said, if there was ever a moment where I understand the widespread “fuck all of these wildly annoying celebrities” notion … it’s right now.

In an apparent effort to remind people they exist, celebrities such as Gal Gadot, Kristen Wiig, Mark Ruffalo, James Mardsen, Sarah Silverman, Jimmy Fallon, Zoe Kravitz, Sebastian Stan, Natalie Portman, Amy Adams, Pedro Pascal, Will Ferrell, and more hopped on social media to all sing John Lennon’s “Imagine” together, and the results are as eye-gaugingly cringeworthy as you can imagine.

“We are in this together, we will get through it together.”

Gal Gadot just posted a video of her and other artists (who are also quarantined because of the COVID-19) singing Imagine by John Lennon on Instagram. pic.twitter.com/fRV6GhAF92

What were they expecting? Everyone to soak in ole J. Lennon’s lyrics and suddenly feel optimistic about our current predicament? I get that their hearts are in the right place, but it truly does take a unique sense of delusion to think that a bunch of rich and famous celebrities singing into a camera is helping anything right now.