John McAfee’s Old Tweets Of Him Saying If He Dies in Jail ‘A La Epstein’, It’s Not Suicide Resurface And Go Viral 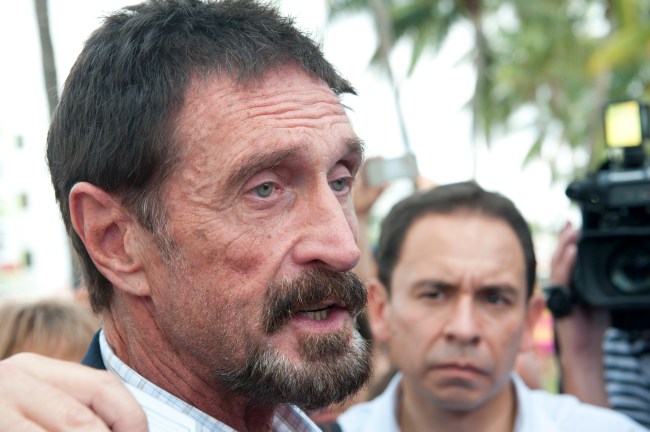 After it was reported that famous antivirus computer programmer John McAfee was found dead in an apparent suicide while in a Spanish jail on Wednesday afternoon, Twitter users unearthed a pair McAfee’s tweets from 2019/ 2020 that are leading them to question his cause of death.

In a tweet published on Oct. 15, 2020, after he was arrested and put in a Barcelona jail, McAfee stated that if he died in jail “‘a la Epstein” it was not suicide.

The food is good. All is well.

Know that if I hang myself, a la Epstein, it will be no fault of mine.

Of course, the “a la Epstein” line is a reference to convicted sex offender Jeffrey Epstein, the billionaire who was found dead and hanging in his New York prison cell who many believe had his suicide staged but was actually killed because he was going to testify against some very powerful people.

Back in 2019, McAfee also implied that U.S. officials were plotting to stage his suicide for whatever reason.

Getting subtle messages from U.S. officials saying, in effect: "We're coming for you McAfee! We're going to kill yourself". I got a tattoo today just in case. If I suicide myself, I didn't. I was whackd. Check my right arm.$WHACKD available only on https://t.co/HdSEYi9krq🙂 pic.twitter.com/rJ0Vi2Hpjj

McAfee was arrested in Spain in October 2020, over tax evasion charges for allegedly not paying years of taxes on unreported income.

McAfee was reportedly found dead shortly after a Spanish Court authorized his extradition to the United States.