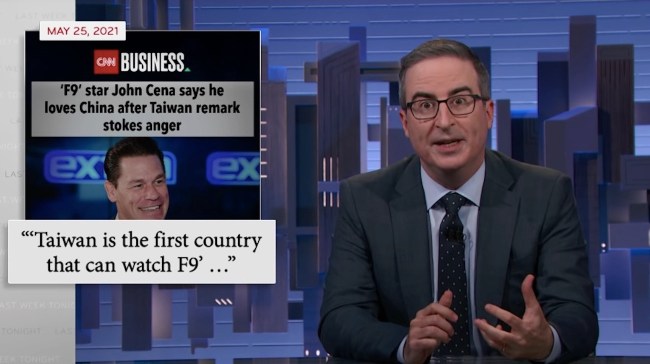 Regardless of what side of the political spectrum you fall on, John Cena’s bizarre apology to China earlier this year likely made your skin crawl.

In case you need a refresher, Cena, while promoting the release of F9, referred to Taiwan — which has been a democratic and self-governed nation for more than half a century — as a country. This is, apparently, a big no-no in the People’s Republic of China, as they refuse to recognize Taiwan as an independent country.

Following the backlash to his comments, Cena went into full corporate puppet mode as he released a bizarre apology video on the Chinese social media app Weibo, likely in an effort to make sure China didn’t squash the release of F9 in the country — a country that represents hundreds of millions of dollars in box office returns. The video, released in May, saw the WWE star speaking in Mandarian as he apologized to China and its people. Yikes, indeed.

“I’m sorry for my mistake,” Cena said. “I must say now, [it’s] very, very, very, very important [that] I love, and respect even more, China and the Chinese people.”

John Cena apologized in Chinese on Sina Weibo after calling Taiwan a country during an interview promoting Fast & Furious 9 pic.twitter.com/dzRKIYgEzL

Fast forward to late October and Cena has found himself in the sights of John Oliver, who clowned on the F9 action star for his willingness to bend over backward for the communist nation during a recent episode of Last Week Tonight with John Oliver.

“Every part of that is so weird. It’s weird John Cena apologized to China. It’s weird he did it for calling Taiwan a country. And it’s weird to see him do it in pretty decent Mandarin. That’s just too many weird things.”

It’s rare that we’re able to say this, but it would appear that almost everyone agrees with Oliver’s sentiment here.