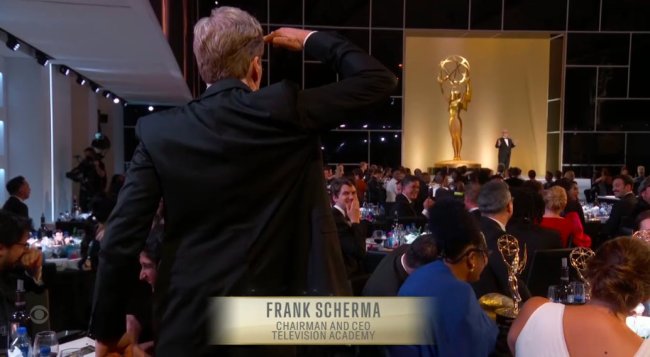 I say “maybe” Conan O’Brien because while the lovely tributes from John Oliver and Lorne Michaels were explicit, Conan’s homage to his late friend was a bit more performative as he made a total mockery of the Emmy’s pompousness. But first, to the more on-the-nose memorials from Last Week Tonight host John Oliver and Saturday Night Live producer Lorne Michaels.

Oliver, accepting the award for Outstanding Variety Talk Series — the sixth-straight year that Last Week Tonight has won the award — paid tribute to Norm Macdonald during his speech, identifying him as the funniest man on late-night TV in the last two decades.

“I do want to say, this is an award for late-night comedy, no one was funnier in the last 20 years than Norm Macdonald on late-night comedy. So if you have any time in the next week, do what I did and just spend time YouTubing clips of Norm and Conan because it doesn’t get better than that,” Oliver said.

“I think like many of us in the room I was rooting for Conan so this is bittersweet. Thank you, Conan for 30 years of inspiring comedy writers,” Oliver said as he began his speech.

Lorne Michaels, the famed creator and producer of Saturday Night Live, also paid tribute to Macdonald, saying he was one of the funniest people he’s ever met:

“Weekend Update has been part of ‘SNL’ for 46 seasons. And here I’d like to pay tribute to one of the best we ever had, Norm Macdonald. He meant the world to people there. Norm was one of the funniest people I’ve ever known and because he’s Canadian I put him up there in the top five.”

Now, as for Conan O’Brien: while he did not mention Macdonald by name (and given that he neither presented nor accepted an award, he didn’t really have a chance), he certainly embodied Norm’s spirit as he openly and hilariously made a mockery of both the event and the big-wig execs in charge of it:

These #Emmys bits have been so relentlessly unfunny, Conan O'Brien had to take matters into his own hands and create his own. pic.twitter.com/AOQYb09024

Conan is the best part of this show and he hasn't even been on stage. pic.twitter.com/jZfEFo6C5f

Conan's behavior at the Emmys was the most meaningful tribute to Norm Macdonald of the night https://t.co/yNVgcD8siC

Conan is giving no F’s tonight!😂

While last night’s Emmy Awards was Conan’s swan song as a *nightly* talk show host, he’ll hopefully return — and maybe win — next year when his weekly talk show on HBO Max gets off the ground.