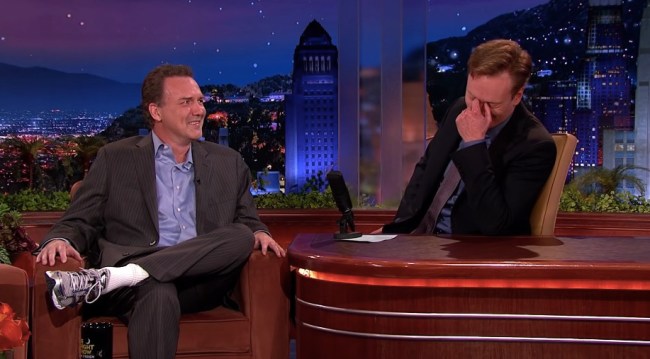 If you’re anything like me, you’ve spent the hours and days since the news of Norm Macdonald’s passing combing through all of his old sketches, skits, stand-ups, and late-night talk show appearances in search of a much-needed laugh. And in doing so, perhaps you’ve noticed that a handful of Macdonald’s most famously viral clips happened while he was appearing on some version of Conan O’Brien’s show. Like the Carrot Top moment from 1997:

Or this absolutely killer oral sex joke he unleashed in the mid-2010s:

Perhaps no clip involving the late, great Macdonald — at least not counting Saturday Night Live — is as well-known and widely shared as the infamous Moth Joke that he told on Conan’s short-lived Tonight Show.

During a special episode of his podcast, Conan O’Brien Needs a Friend, Conan, sidekick Andy Richter, and producer Frank Smiley spoke for over an hour as they remembered the life and genius of Macdonald, which then led to O’Brien breaking down how, and why, the legendary Moth Joke came to be. And as it turns out, the joke wasn’t even planned but was done entirely off the cuff.

“Not too long ago, someone asked Norm about the Moth story that he told on The Tonight Show. The guy wanted to know what gave him the nerve to do that, and that he said, ‘I was only supposed to do one segment, and then suddenly, the producer came over and said, ‘You’re doing another one!'”.

At this point, Conan makes note of the fact that whenever he had Macdonald booked for his show, he wanted to feature him as much as possible.

“He heard that joke from Colin Quinn, and he did his first segment, and he had seven-minute prepared, he’s done. But then you [Conan] say, ‘We’ll be right back with more Norm!’ and he goes, ‘I’ve got nothing to say.’ So then he remembered the Colin joke, and it was a 20-second joke, so he asked you [Conan] how long the segment is, and he was hoping you’d say 20-seconds. You said seven minutes. So it became a seven minute joke.

Conan himself now take the story back over, detailing how Norm was literally doing that joke on the fly, making it up as he went along:

“This has to be understood: he’s doing this on the fly. His way to slow it down, that he came up with on the fly, is that he invents a Chekhov play with Russian names and there’s an ineffeable sadness in life weighing on the character’s soul. I’ve never met anybody who would take that chance and make that chance, and I’ll ever meet anybody like him again.”

“He was the ballsiest comedian in the history of comedians,” Smiley added in.

And there you have it: one of the most famous late-night bits of all time wasn’t even meant to be and was born out of nothing more than Macdonald’s combination of blinding intelligence and commitment to absurdity. A truly singular comedic voice. He will be missed. Rest in Peace, Norm.