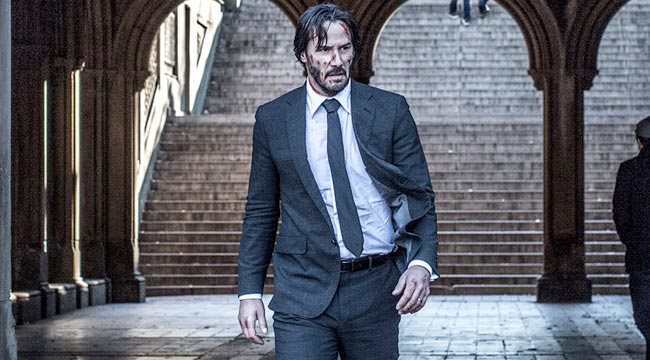 We are still a year and three weeks from the release of John Wick: Chapter 3, but it’s never too early to get juicy plot details for the upcoming assassin flick. Lionsgate released an official synopsis and a teaser poster for John Wick 3 and it sounds like there might be an assassin shootout or two-hundred in NYC.

Chapter 3 will be centered around The Continental Hotel in New York City and the dog-loving hitman will have to fight, shoot, stab his way out of the city with an army of executioners hunting him down. Lionsgate unveiled the official synopsis at CinemaCon in Las Vegas and it sounds tremendous.

“John Wick (Keanu Reeves) is on the run for two reasons… he’s being hunted for a global $14 million dollar open contract on his life, and for breaking a central rule: taking a life on Continental Hotel grounds. The victim was a member of the High Table who ordered the open contract. John should have already been executed, except the Continental’s manager, Winston, has given him a one-hour grace period before he’s “Excommunicado” – membership revoked, banned from all services and cut off from other members. John uses the service industry to stay alive as he fights and kills his way out of New York City.”

Will John Wick be a killer butler or bellboy? Will he have to kill someone with a a room service cart? Keanu Reeves is back as the lethal John Wick, Laurence Fishburne returns as Bowery King, Common returns as Cassian, and Ruby Rose is back as Ares. Also returning is Chad Stahelski, who also co-directed the first film and John Wick: Chapter 2. In an interview with Collider last year, Stahelski explained why he wanted to bring John Wick back to NYC.

“We want, not so much to go bigger on the third one, but to show you more of the intricacies of the world… I feel like there are all these different subtleties that I skipped over in Number Two, that I’d like to go back to on [chapter three] and show you the inner workings of different parts of New York. So rather than massive set pieces, I’d like to show you cooler and more intricate ones… I think it would be a mistake budget wise and creatively to just go big and blow up a freeway. That’s not our gig. That’s a comic book or a Bond gig. We want to show you cool and intricate details. What are those little details in everyday life? Hopefully – we make people look at garbage collectors and cleaner vans and homeless people a little differently now.”

The movie started filming in New York City this week.