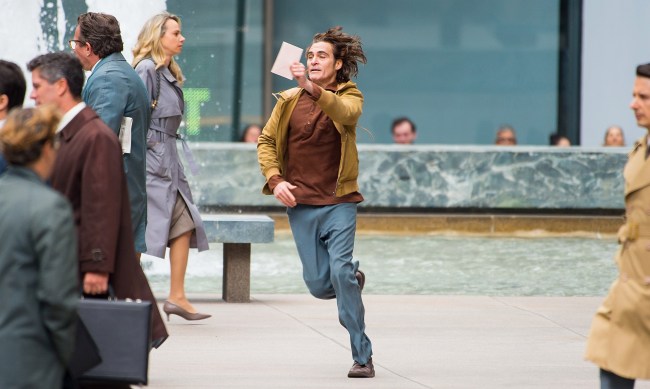 Joker, which also stars Zazie Beetz and Robert De Niro, is scheduled to hit theaters on October 4th of this year, which is why Phillips’ new photo of Phoenix is captioned, “Editing #Joker.”

In the picture, Phoenix appears as Arthur Fleck in what I assume is his pre-Crown Prince of Crime days studying a TV set. Perhaps he is watching De Niro’s character, talk show host Murray Franklin, as one of the many VHS tapes underneath the TV appears to have Murray’s name written on it.

Considering the timing and content of Phillips’ Instagram post, as well as the movie’s release date, this could mean that a teaser trailer for the movie may be coming along any day now.

Yeah, probably not, but at least it’s something to tide us over until the real thing hits the internet.

Something else to tide us over is this video which hit the internet last month that purportedly reveals Phoenix’s version of Joker’s laugh.

“I wouldn’t quite classify this as like any genre. I wouldn’t say it’s a superhero movie, or a studio movie or a … It feels unique, and I think more then anything, and probably the most important thing, is Todd seems very passionate about it and very giving, and so that’s exciting,” Phoenix told Collider last year. “I think, underneath the excitement of these films, and the size of them, there are these incredible characters that are dealing with real life struggles. And sometimes that is uncovered and exposed, and sometimes it isn’t, and so I always felt, like, there were characters in comics that were really interesting and deserve the opportunity to be kind of studied. And so I think that’s what Todd sees appealing about this idea.”

Check out even more behind-the-scenes photos and videos from the set of the upcoming Joker movie here.