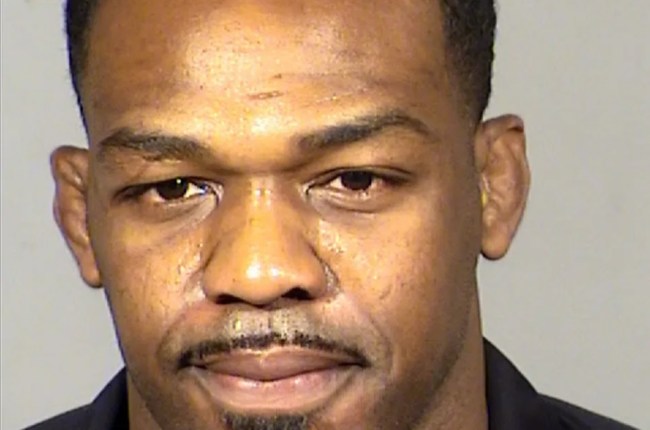 Last week, Jones was arrested for domestic violence in Las Vegas a day after being honored at the UFC Hall of Fame.

TMZ obtained the police report which reveals Jones’ was arrested for a “domestic disturbance” involving a woman with “bleeding from her nose and mouth.” When Jones was arrested he reportedly smashed his head onto the front hood of the police officer’s vehicle.

According to a Vegas Metro PD arrest report, cops were called to Caesars Palace around 5:08 AM for a “domestic disturbance” in a hotel room … involving a white female who was “bleeding from her nose/mouth” and a “black male adult who is a professional MMA fighter.”

When police arrived, they spotted Jon walking near the hotel, where they stopped and detained him.

Cops say 34-year-old Jones became “irate and smashed his head onto the front hood of the LVMPD patrol vehicle,” leaving a medium-sized dent, as well as chips in the paint.

While handcuffed, police say Jones experienced a wide range of emotions. At one point, cops say he threatened to sue the department for handcuffing him on the biggest night of his life.

According to MMAFighting.com the alleged victim, who was later identified as Jones’ fiancée Jessie Moses, was found with blood covering her face and clothes said Jones got physical by pulling her but denied that he hit her. Police went on to note that Jesse was concerned about when Jon would be released from jail following the arrest.

Moses then stated that “she was sleeping and Jones came back, [he] was not very happy” and when asked if he got physical with her, she answered, “a little bit yeah.”

Moses then claimed that Jones “touched the back of my head and pulled my hair a little bit but he did not hit me or anything.” Moses explained that Jones allegedly grabbed her by the hair because she was “trying to leave the room.”

Police then observed blood on her clothing and a bump with “dried up blood on the lower part of her lip as if she was in a physical altercation.” Moses said she was unaware that anything happened to her lip while adding, “I know they are really dry.”

According to police, Moses had blood “around her lips, chin and all over her sweatshirt” along with a swollen lower lip, with officers stating she “seemed scared to even talk about” Jones.

The initial call to police came after Moses went to the security desk at the hotel asking for a key to her room, which is when a guard noticed that she had blood on her lip and clothing. The report states Moses began tearing up and she said she was scared to go back to her room, with one of their children asking, “Can you call the cops?”

After police conducted an initial interview with Moses, who didn’t want to be recorded and declined to fill out a voluntary statement, she asked the officers, “How long do I have until he is out?”

“She still seemed very scared as to the release of Jonathan from jail,” the report said.