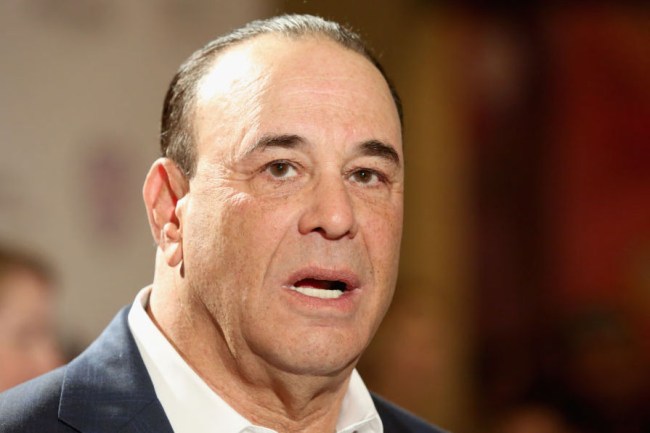 Running a bar isn’t just a business—it’s a science— and no one knows more about bar science than Jon Taffer, a fact that’s been pounded into my mind thanks to the countless episodes of Bar Rescue I’ve watched (and rewatched) over the years.

I can’t tell you—nor do I really want to know—how many hours of my life I’ve spent binging the show, waiting with bated breath to witness deflated owners question every life decision they’ve ever made and see how many Harbortouch POS systems will be installed when everything is said and done.

They say you should never meet your heroes but I was more than willing to take that risk when I recently got the chance to sit down and talk with one of the few people in the world who have earned the title of “hospitality legend.”

I headed to the interview about an hour earlier than I needed to knowing Taffer wouldn’t take too kindly to me showing up late regardless of any explanation I may have had, because if I know anything in life, it’s that Jon Taffer hates excuses. Thankfully, he was the one who was running late (I decided to take the high road and not tear him a new one because of it).

I was curious if he’d be rocking his signature “polo with a blazer” look and have to admit I was slightly disappointed when I entered the room to discover he was sporting a suit (regardless of how dapper he may have looked). Thankfully, I’m glad to report he more than lived up to the rest of my expectations.

Taffer was raised on Long Island by his mother after his father passed away from a heart attack on Christmas Eve when he was just two years old.

By his account, she was an abusive woman with a fierce temper, and as a result, he was forced to figure out how to diffuse tense situations from an early age. He did so by harnessing what he refers to as “reaction management,” a science of emotional manipulation that would lay the foundation for his entire career.

Taffer would eventually head west to Denver for college, where he studied political science—a major he says still comes in handy. He found himself working at a bar to support himself and quickly fell in love with the industry.

While trying to make it as a drummer in a rock band, he found himself in Los Angeles at the tail end of the 1970s working a job at The Troubador,  the legendary bar that helped launch the careers of the likes of Black Flag and the Dead Kennedys (Billy Joel, Elton John, and Bruce Springsteen were also known to make appearances). 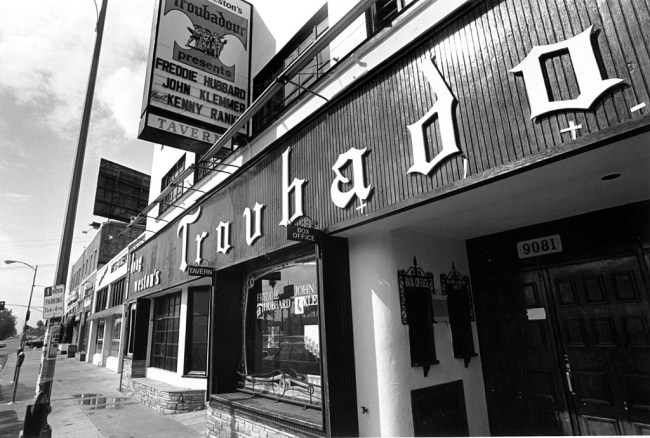 While he was originally hired as a doorman, he soon found himself managing the venue after the owner tossed him the keys one night and told him he was now the man in charge.

At the time, the staff openly ate and drank for free (which typically isn’t conducive to a successful business venture) and it didn’t take long for him to institute some of his beloved systems to help turn things around.

After almost four years in L.A.—he did another stint at Barney’s Beanery—he’d eventually depart to pursue some other ventures—including Pulsations, an 11-story, 4,000-person capacity club outside of Philadelphia that featured a giant spaceship that descended from the ceiling to deposit a robot onto the dance floor—the same robot that would eventually be leased to be used in Rocky IV.

Pulsations would make a staggering $647,000 in its first week of operation—which Taffer describes as “fantasy land,” even to this day—and the sight of the robot was apparently enough to move him to tears on the club’s opening night:

“I found myself crying. I looked at the robot operator who was standing next to me and he was crying too. Then I looked and there were security guys who formed a circle around the robot when it came out of the spaceship and they were crying too.

That was as close to a religious experience as I’ve had in my life. From a machine! It took people to a place I’ve never seen. All these years later when I go to the greatest nightclubs in the world, none of them can create the emotion I saw that night.”

This was one of two times Taffer would cry during his career in the industry—the second was the night he closed down the first bar he ever actually owned himself:

“It was four in the morning and I closed the bar. It had a boxing ring and a dance floor in the middle and we spent all this money. It cost about a million dollars to open it. I was in it by myself and was about to turn the lights out and I looked at the room and I started to tear up because my dreams came true.”

Taffer would spend the following decades mastering the art of bar science and exploring what makes the industry tick, developing strategies to maximize both profits and the reactions that drive them—like his ability to manipulate people through music:

“I took about 55,000 songs and sorted them by energy level, beats per minute, keys, instruments, and vocal type. We would try to control violence. One trick was every third song was a female vocalist. Gang members just won’t hang out.

I knew as a musician that the science of music is a very real thing. Even in restaurants, I can get you to chew faster.”

After making a name for himself, he would eventually find himself speaking at conferences and conventions addressing bar owners looking for a way to take their business to the next level—or save themselves from ruin.

It was at this point Taffer saw an opportunity to branch out and decided to make television his next venture despite the warning of an associate who warned him he was too old and ugly to serve as the face of a show.

Undeterred, he filmed a sizzle reel for the program that would ultimately become Bar Rescue and landed a deal almost immediately after pitching it to multiple networks (he sent the aforementioned doubter a dozen black roses when the show was picked up).

Since then, Taffer has had one hell of a ride. He’s rescued almost 200 bars over six seasons of Bar Rescue and was more than happy to share some of his favorite stories—including the worst owner he’s ever dealt with:

“The worst owner was probably Smiling Ed, who owned The Dugout in Chicago. It was two blocks from Wrigley Field about three weeks before the World Series so the whole city knew I was there so I couldn’t walk out and not remodel the bar.

This guy was the biggest jerk to his employees that I ever met. I remodeled the bar and all of the employees walked out and quit. I tossed him the keys and the episode ended with him saying ‘Does anyone know how to tend bar?’”

He’s also had some incredibly tense moments on the show but none top the time he was almost clocked by the co-owner of Jack’s Fire Department in Queens, where he said he really had to put his skills to the test to deescalate the situation:

“If you study human nature, a person’s pupils dilate before they hit you. So when I get close to someone, I do it because I’m staring into the pupils of their eyes, and if they start to dilate, I’ll do something to diffuse it.

In the case of Jimmy, I grabbed his arm, gave it a little squeeze and it completely diffused the situation. I was still screaming at him but the little squeeze established a connection that diffused him so I could still keep the intensity without the threat.

However, Taffer’s tactics aren’t exclusively applicable to the bar industry as we recently learned when he announced the arrival of Marriage Rescue, the absolute electric factory that recently debuted on Paramount Network.

Bar Rescue‘s working title was originally On The Rocks, and while that name was eventually abandoned due to its association with relationships, things have come full circle as Taffer has decided to help couples—who have no idea he’s the one helping to rehabilitate things—that travel to a Puerto Rican resort as a last resort to fix their marriage.

Taffer explained the origins of the show to me, saying:

“I found myself working with these personal relationships in marriages on Bar Rescue and I got really good at it. I had to fix the relationships of the owners and couples so the network said to me, ‘The best part of Bar Rescue is when you help these married couples so let’s build a show around them.'”

While he undoubtedly has the credentials to fix a bar, I was curious what qualified him to do the same to marriages aside from the fact that he’s been married to his wife Nicole for 20 years (he and his first wife got a divorce after becoming business partners; he cites financial issues as the number one cause of separations in the country).

Taffer drew some parallels between the industry and relationships while making his case:

“A marriage is very much business and business is very much personal like a marriage. So I found that it’s sort of fuzzy and that I’ve actually been helping relationships for a very long time.

I wanted to learn and respect the professional therapy process so I learned and read everything I could find about it and then realized I’m not going to do that but I’m gonna do it my way.”

Taffer provided plenty of pieces of advice during our chat, but as someone who’s getting married this year, none of them stuck out as much as this:

“Your marriage is not about you. It’s about your wife. It’s the most important thing to understand. Therapists will tell you about love and connection and continuity and contribution. It’s all about significance.

Time will tell if Taffer manages to establish himself as a top relationship expert, but seeing as I was in a room with a man with a virtually unparalleled grasp of the bar industry, I wasn’t going to leave without getting some insight into what makes a good bar as opposed to the terrible ones he’s been tasked with rescuing over the years:

“My favorite bar in America is the Ten Pound Bar at The Montage in Beverly Hills, which is one of the greatest scotch bars in the country. Mr. Coco in Las Vegas is also a pretty terrific one.

I very much like neighborhood bars—a nice, cozy neighborhood bar. Bars are about people and sometimes the environment of a bar conflicts with the actions of people. Great bars cause the interaction of people.”

Taffer is a big scotch guy—he always has a bottle of Johnnie Walker Blue on hand at home and his go-to drink is a Godfather (scotch topped with amaretto)—but when questioned about the one cocktail everyone should know how to make, he was quick to answer: the margarita, which he cites as the most popular drink in America and perfect for any party.

I’d be lying if I said a small part of me wasn’t worried about having the interview shut down at some point during our talk but I’m happy to announce I managed to make it through without attracting the wrath of Taffer—although the same can’t be said for the couples he’s been helping on Marriage Rescue, which has already become appointment viewing for me.

If you haven’t hopped aboard the bandwagon yet, I highly suggest you join me when Marriage Rescue airs on Paramount Network at 10 PM on Sunday nights.