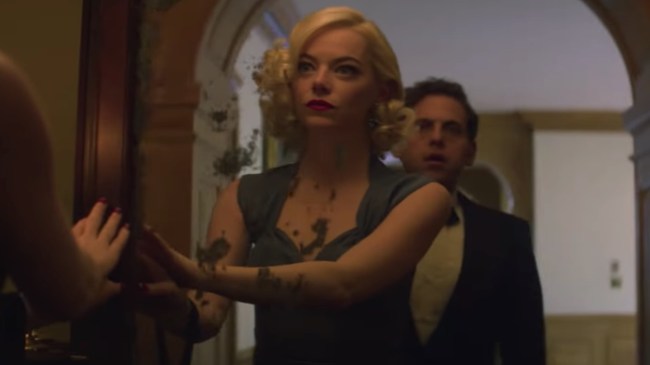 We are less than a week from the highly anticipated Netflix miniseries Maniac to debut and it is still mysterious AF. What we do know is that the miniseries will star Superbad co-stars Jonah Hill and Emma Stone, which is instantly an intriguing draw.

The sci-fi series based on a 2014 Norwegian satire series of the same name is directed by Cary Fukunaga (Beasts of No Nation and True Detective). We do know that the trippy 10-episode show has something to do with a pharmaceutical drug trial where Stone’s character “Annie” and Hill’s character “Owen” apparently meet.

The two characters appear to struggle with mental illness, but a new drug is supposed to cure them of their ills. The new teaser trailer shows the two strangers are said to have a “cosmic connection” and continually show up in drug-induced dreams of different worlds. After that things are a little hazy.

Here is the official synopsis of Maniac from Netflix:

Set in a world somewhat like our world, in a time quite similar to our time, Maniac tells the stories of Annie Landsberg (Emma Stone) and Owen Milgrim (Jonah Hill), two strangers drawn to the late stages of a mysterious pharmaceutical trial, each for their own reasons. Annie’s disaffected and aimless, fixated on broken relationships with her mother and her sister; Owen, the fifth son of wealthy New York industrialists, has struggled his whole life with a disputed diagnosis of schizophrenia. Neither of their lives have turned out quite right, and the promise of a new, radical kind of pharmaceutical treatment—a sequence of pills its inventor, Dr. James K. Mantleray (Justin Theroux), claims can repair anything about the mind, be it mental illness or heartbreak—draws them and ten other strangers to the facilities of Neberdine Pharmaceutical and Biotech for a three-day drug trial that will, they’re assured, with no complications or side-effects whatsoever, solve all of their problems, permanently. Things do not go as planned.

The new teaser trailer for Maniac gives us a little more details on the intriguing TV show.

Here is the first teaser trailer that arrived two months ago.

Justin Theroux and Sally Field also star in the miniseries. The first season of Maniac will be available on Friday, September 21.

Let’s hope that there is some sort of crossover from the Maniac universe to a Superbad mind-trip.