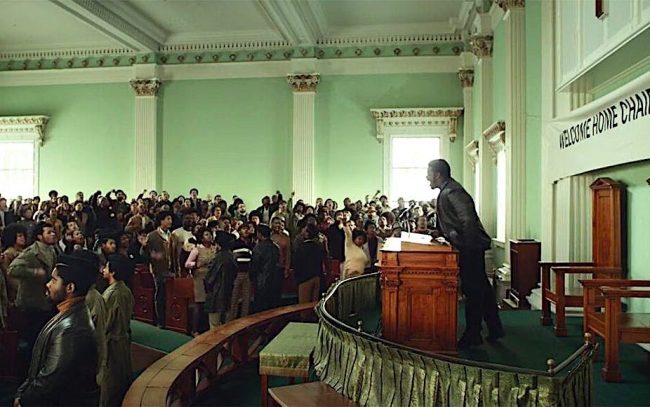 The best movies feel timeless. That’s why people love Blade Runner even though, deep down, they know it’s not all that exciting. Despite being shot in the early 80s, Blade Runner‘s production design was so convincing then and remains so to this day that it always feels like a future that’s just over the horizon. It’s a future we both see in our minds but understand we’ll probably never see in our lives.  It’s that timelessness, of both the past and the future variety, that allows films of all genres, from Blade Runner to Stand by Me to Star Wars, from Forrest Gump to The Shawshank Redemption to Terminator 2 and Indiana Jones, that fuel the longevity of some of America’s most classic modern films.

Timelessness, though, like all things in this world, can only be appreciated depending on your perspective. On the flip side of that coin, it’s a curse: this side of the coin doesn’t wonder when things will be this way, it wonders why things are still this way. Judas and the Black Messiah possess both of these qualities, as its timelessness is what makes it so excellent, but also so tragic: while the events depicted take place a generation prior to mine, it feels like it could’ve been yesterday, as themes of law enforcement abuse, political extremism, a society cracking under increasing racial tension, and the people versus the government provide this film’s backbone. That notion is embodied by Lakeith Stanfield’s William O’Neal, who — after robbing a local bar with nothing but a trench coat, a Humphrey Bogart hat, and a fake FBI credential — argues that a badge is far scarier to a gun to the people in his community. As O’Neal tells it, anyone on the street can get a gun, but a badge makes it feel like the whole army is behind you.

While Stanfield predictably puts forth a captivating performance that’s riddled with his trademark nervous energy, he’s simply drowned out by the purely seismic performance of Daniel Kaluuya’s Fred Hampton, who commands every ounce of attention you have from the second he enters the frame. It may be early in the 2021 movie cycle, but given The Academy’s penchant for nominating performances based on real, especially political, people, it’s hard to imagine five more performances this year that are more worthy of Best Actor nominations (this would mark his second nomination following his 2018 nod for Get Out). Rarely do performances have you hanging on their every word, but Kaluuya accomplishes this very feat in Judas, imbuing the unfathomably young Hampton with both titanic gravitas and a subtle, at times bordering on serene, sense of purpose. Kaluuya makes Hampton feel like a man both living in the moment and without time at all, as if he already knows his mission, and his life, is that of a ticking clock.

Naturally, with a character and performance as powerful as Kaluuya’s Hampton, the film inherently suffers when he’s not on screen. This is not to say it’s not good in those moments, it’s just that you find yourself wishing you could be wherever Kaluuya’s Hampton is, which in this case, is prison. Regardless, that concern is rendered moot by both the increasing tension surrounding Stanfield’s deep-undercover O’Neal and a handful of set pieces. At just over two hours, this Judas and the Black Messiah has everything you’d want — drama, action, love, tension, etc. — in the sort of adult dramas that self-proclaimed cinema snobs find themselves asking for and it delivers those on both those varying emotions and thrills effectively and efficiently.

Hampton and his Black Panther Party lived by the creed “power to the people”, and that’s ultimately the most succinct summation of this film: its power is in its performances. From Kaluuya and Stanfield to Jesse Plemons’ FBI agent and Martin Sheen’s somewhat terrifying J. Edgar Hoover, Judas and the Black Messiah is a solid movie with an effective and efficient plot — that features a fair bit of enthralling stand-offs, both of the physical and vocal variety — that’s raised to greatness by the depth of its cast, Kaluuya’s transcendent turn as the late Hampton in particular.

Judas and the Black Messiah hits theaters and HBO Max on Friday, February 12.