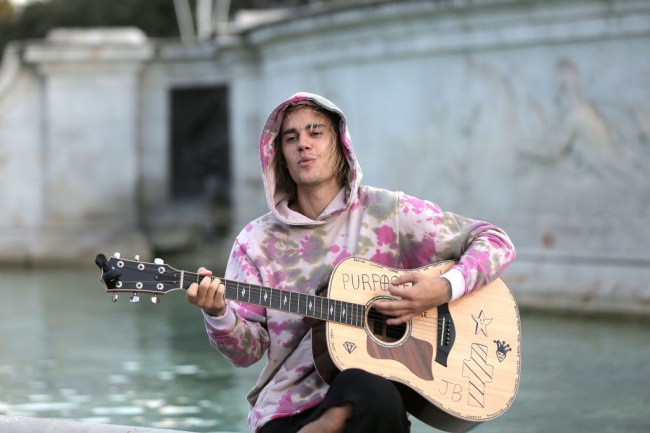 A photo of an alien dressed as Justin Bieber eating a burrito is circulating the world wide web for reasons that should threaten national security. This extraterrestrial imposter is doing its best homosapien impression, rocking one of those winter hats with the hair already in it, a disarming pink hoodie, and oval glasses to mask its oblong peepers. Not a bad go at it, E.T., but you made one critical mistake: and that’s eating a burrito like someone who just woke up from a 28-year coma.

Now, you’re guaranteed to see a lot of Beliebers defending their God, maybe a few copy cat offenders, but I advise anyone out there who knows someone who eats a burrito like this to contact their local authorities or NASA branch. If you don’t, you’re complicit in the crime. That also goes for people who eat ice cream cone first and all those Italians who eat salad after their main course and all those me’s who eat the Fun Dip stick first and then rip the sugar like a tequila shot.

God forbid, if humans and everything we’ve built are wiped from the earth tomorrow and thousands of years from now the planet becomes civilized by a whole new species, we cannot run the risk of this photo being the last remaining human artifact. Even the humanoids 3.0 will be like “holy fuck those humans were clinically insane.”

Horizontal burrito eating shall be stopped, if not for you or I, for all of human civilization.

God help us all.

all the things we choose to get outraged by and yet we let Justin Bieber eat burritos like this! pic.twitter.com/9CFAjN7k84

My next true crime story is about this photo of "Justin Bieber" eating a burrito sideways https://t.co/bQbA80OoGL