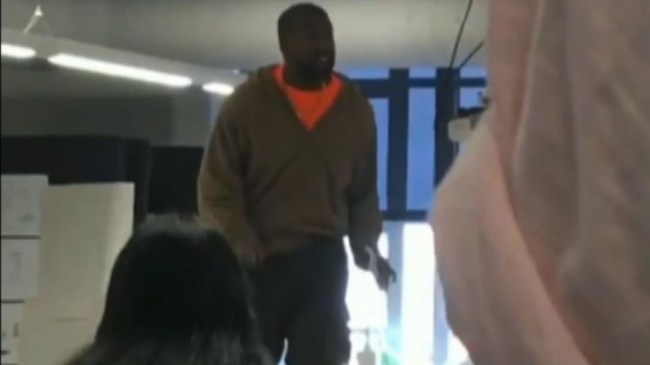 No. That headline is not a Mad Libs sentence that a few manatees created by selecting random idea balls. Kanye West jumping on top of a table at a college and telling students to leave Elon Musk “the fuck alone” is really something that happened in real life. There is even video proof if you don’t believe me.

On Tuesday, Kanye toured the College for Creative Studies in Detroit and looked at various exhibits. However, the moment that has gone viral from his visit has nothing to do with art, design, or photography. It had to do with Elon Musk’s personal life.

Ye yelled from atop a table in a classroom at the college, “Elon Musk, I don’t give a fuck who’s over at this house. Leave that man the fuck alone!” One would imagine that every student in the classroom then asked, “Is this going to be on the test?” The student who tweeted out the video said, “Kanye really came to our little art school and told us to leave Elon Musk alone.”

Musk needs all of the support he can get after being sued by the Securities and Exchange Commission (SEC) and agreeing to a settlement that he would step down as Tesla’s chairman and would also pay a civil penalty of $20 million stemming from a tweet about taking Tesla private that included a dumb 420 joke.

In possibly very related Kanye West news, Ye said that he is currently off his medication earlier this week.

Kanye continues to preach his message of love.

Ye also ate a plate of bugs with his dad to celebrate his father beating cancer. Maybe a nice sheet cake from Costco would have sufficed.

My dad and I are going to eat this plate of bugs to celebrate him beating cancer. No more fear pic.twitter.com/b3ywEX13v2

Kanye also gave more clarification to his “abolish the 13th Amendment” comment that he was lambasted for, but now some, including the Washington Post, are understanding West’s baffling slavery statement.

Why Do Inmates Fight Wildfires for Dollars a Day? The Origins of Prison Slavery in America.https://t.co/sYLiQAHXv8

Kanye had a wild weekend that included appearing on SNL, inviting Colin Kaepernick to the White House to meet President Donald Trump, and changing his name to “Ye.”

You didn’t think I’d reference that genius South Park moment and not hit you with the actual clip did you?