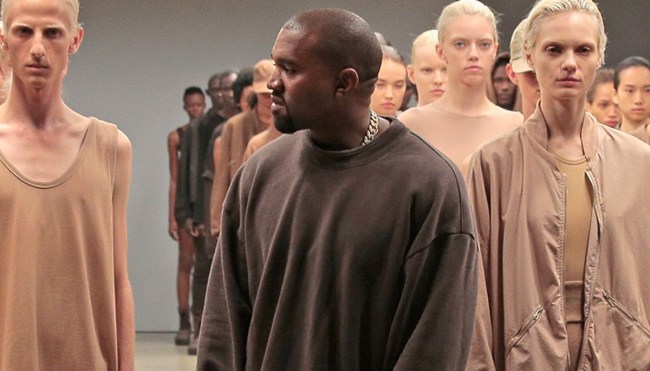 It’s been almost seven years since Kanye West unveiled his first collection of clothing after teaming up with Adidas for what was dubbed “Yeezy Season 1,” which debuted with a splash at a star-studded New York Fashion Week show.

The initial line featured a variety of rugged and oversized items, which ranged in price from a $405 thermal shirt to a $3,250 jacket. His foray into fashion was met with skepticism by plenty of people, but the rapper who first turned heads by pairing Gucci backpacks with pink Ralph Lauren polos in an era when his contemporaries favored baggy jeans and laughably large basketball jerseys would soon go on to establish himself as a force to be reckoned with in the space.

West has since made a fortune thanks to the success of the Yeezy brand and largely silenced the many critics who argued no one would want to shell out as much as many people happily have for clothes that were frequently compared to something you’d expect a homeless person to wear.

Now, it looks like things have come full circle, as TMZ reports people who belong to that particular group will be rocking West’s newest collection at a fashion show.

According to the outlet, West is collaborating with Skid Row Fashion Week with the hopes of contributing to the fashion label’s admirable mission by donating proceeds from a new line to help Los Angeles’ homeless population and allowing some of the unhoused workers with jobs at the factory where the clothes are produced to rock them at an upcoming event.

Say what you will about West, but it’s hard to hate on him for this move (from a creative angle, it’s not entirely far-fetched to make the argument this could also be viewed as a commentary on the traditionally exclusive nature of high fashion—an industry that West was able to infiltrate alongside legendary designer Virgil Abloh, who passed away last year after a meteoric rise that led to him being named the first Black creative director in the history of Louis Vitton).

With that said, the news inspired a mix of reactions—including a number of obligatory references to Zoolander (which drew its inspiration for Derelicte from an actual clothing line).

Kanye is designing puffer jackets made from trash bags with unhoused people modeling them on the runway.

I think his heart is in the right place, but he is basically creating Mugatu’s “Derelicte” line from Zoolander.

We should have seen this coming.https://t.co/ivee1SB2GB

Kanye using homeless people for his next show is giving Mugatu from Zoolander pic.twitter.com/z5uHxiI8wL

they said Kanye clothes look like they for homeless people & he was like…. let’s get them to model this shit then 😭

I dont ever pay attention to anything Kanye does but him hiring homeless people as models is something I can get behind. That's dope af

Kanye getting homeless people to model in his fashion show is disgusting. Buy them a house instead, d bag

Based on Kanye’s history, there’s a chance this could be an absolute disaster that manages to backfire disastrously, but we’ll just have to wait and see.