Movie Fans Are Not Happy With This Trailer For ‘Karen’, A Blatant ‘Get Out’ Rip-Off 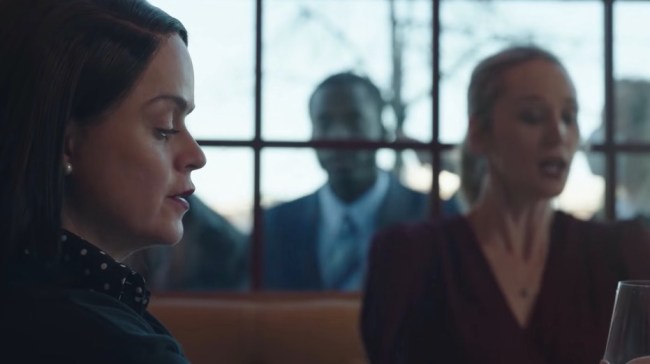 The existence of Hollywood B-movies has always fascinated me. Or rather, the business of the B-movie industry has. Sure, I understand it from an artistic perspective, as the B-movie landscape represents a breeding ground for either up-and-comers looking to get a few acting credits under their belts or wash-outs looking for another paycheck. But the business of it absolutely confounds me. Who, exactly, are these movies made for? Who’s paying to get them made? Who’s buying them to put them on the air?

Case and point: this upcoming BET film called Karen, directed by a man named — and I kid you not — Coke Daniels. The trailer for Karen dropped earlier this week, and needless to say, movie fans came out guns blazing, absolutely ripping the project for being a blatantly cheap rip-off of Jordan Peele’s Academy Award-nominated hit Get Out.

You know how many good scripts I’ve read that’s sitting on the shelf? https://t.co/nkwmEEwDaU

They really tried to make a horror movie about Karens?

That KAREN movie will likely make about as much of an impact as that Charlie Sheen 9/11 movie. Don't take the bait…

I just finally saw the trailer for that KAREN 'horror' movie. I can't stop laughing.

Its unbelievably cringe! Its like someone took every woke stereotype and fear mongering about race relations and put it into a blender without nuance or subtlety.
No surprise its from BET. 🤦🏿‍♂️ pic.twitter.com/W5MbiaKwgP

Not implying Karen looks good, but we’ve gotta move past the idea that Peele created racially-focused horror. The man is brilliant and Get Out was a watershed moment that Hollywood is capitalizing on, but we’ve had good, and bad Black horror movies before that.

choosing not to believe KAREN is a real movie

Here’s the synopsis for Karen, via Deadline:

The Orange Is The New Black alum is set to play Karen White (a suitable name) who believes that races should stick to their “own kind”. She carries this belief into her neighborhood. So when her new Black neighbors Assata and Malik move in, she makes it her personal mission to remove them from the neighborhood, by any means necessary. However, Assata and Malik don’t have time for this. As cardholding Black Lives Matter members they aren’t going down without a fight.

To his credit, director Coke Daniels seems to be taking the negative Get Out comparisons in stride, posting a screenshot of Karen trending on Twitter, captioning the photo: “Trending on Twitter! Keep comparing Karen to Get Out! We’ll receive that!”

Karen, which stars Taryn Manning as Karen White, Cory Hardrict as Malik, and Jasmine Burke as Imani, does not have an official release date at this time. Gregory Alan Williams, Dawn Halfkenny, Brandon Sklenar, Roger Dorman, and Hunter Bodine will also appear in the film.