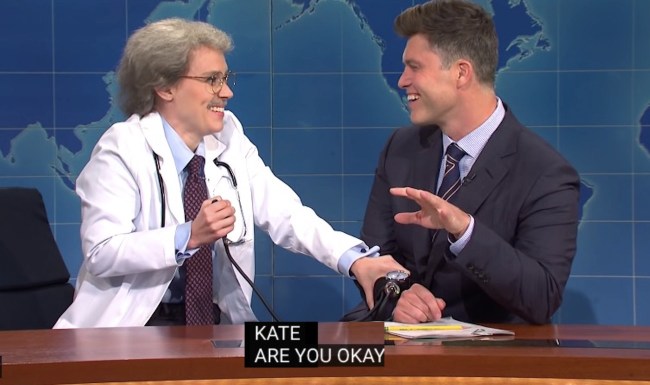 In case you haven’t heard, Bill Burr was the host of Saturday Night Live this weekend, and unsurprisingly, not everyone was a fan. Considering that Bill Burr is Bill Burr, that was always going to be the outcome. Personally, I think Burr is one of the greatest stand-up comics working today, so watching him make a bunch of midtown yuppies squirm in their seats was something I rather enjoyed.

Naturally, because Burr did his whole Bill Burr thing, his monologue (particularly the part where he ruthlessly dunks on white women) has been the most talked-about aspect of this weekend’s Saturday Night Live episode.

However, despite the instant virality of Burr’s routine, I’d argue that the highlight of the episode belonged to SNL MVP Kate McKinnon, who broke character during the Weekend Update in a way that I’ve never quite seen.

Don’t get me wrong, I’ve seen tons of comedians and hosts break character on Saturday Night Live throughout the years — in fact, those moments are some of the funniest the show has to offer. But I’m not sure I’ve ever seen someone break character to such an extent that their scene partner addresses them by their real first-name in the middle of the sketch, as Colin Jost does with McKinnon here.

As McKinnon was venturing off the deep-end with her “Dr. Wenowdis” character, Jost — fighting through tears of laughter — look McKinnon directly in the eyes and simply asked: “Kate… are you okay?” McKinnon, to her credit, responded the only way she could: “…I’m obviously not.”

The whole sketch is worth the watch (as is anything Kate McKinnon does), but if you want to skip ahead to the madness, the wheels start to come off at around the 2:40 mark.

Make sure to tune into next weekend’s episode of Saturday Night Live, which is set to have HBO star Issa Rae as its host and Justin Bieber as its musical guest. No word on if Dr. Wenowdis will be in attendance.