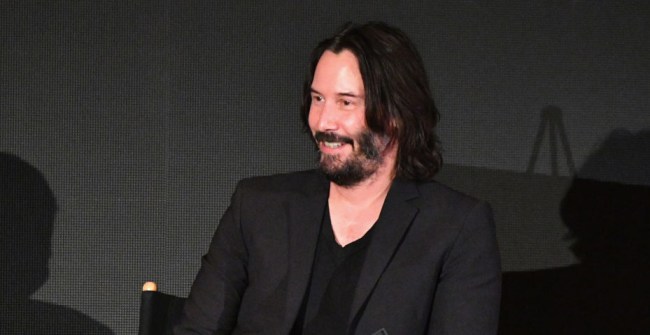 Keanu Reeves, hero to humanity (when he isn’t assassinating dozens of bad guys), has filmed some new, extremely well done and very entertaining ads for Squarespace, one of which will air during Super Bowl LII.

As was the case for Super Bowl LI last year, Squarespace once again has their star, in this case Keanu Reeves (last year it was John Malkovich), put themselves in situations where keeping a straight face must have been the hardest part of shooting the commercials.

They even made a sly reference to the legendary “Sad Keanu” meme (Reeves loves his memes) in the spot entitled, appropriately, “Make It With Keanu Reeves | Tear.”

And here’s the second of a reported three commercials Reeves shot, which also is “Excellent!”

“When I found out that this Squarespace campaign would be for the Super Bowl, I got butterflies in my stomach,” Reeves said in a press release. “I love football, I love watching the Super Bowl, and I love the entertainment of the advertisements that are a part of the game and the experience.”

Doesn’t hurt that his company, Arch Motorcycle, is going to be getting some pretty sweet Super Bowl air time as well.

And just because (1) they’re so entertaining, and (2) they won the Emmy for Best Commercial in 2017, and (3) what else do you have to do today, here are last year’s very clever spots starring John Malkovich.