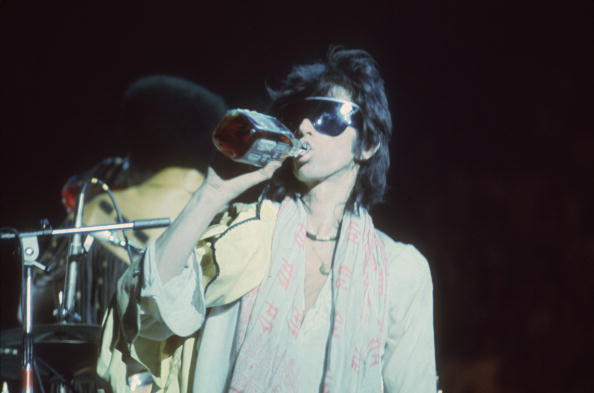 Keith Richards turns 75-years-old in four days and some say he is starting to act his age. Whatever that means. The Rolling Stones rocker revealed that he is giving up alcohol. Well, sort of.

In an interview with Rolling Stone, Richards announced that “it was time to quit” boozing. The Rolling Stone guitarist said he “pulled the plug on it” because he “got fed up with it.” Richards admitted that he has been decreasing his alcohol consumption for “about a year now.” Expect the stocks of liquor companies to plummet today.

Keith said, “just like all the other stuff” it was the time to stop. Richards acknowledged that there were some adjustments to not being drunk. “You can call it that, yeah. But I don’t notice any difference really – except for I don’t drink. I wasn’t feeling [right]. I’ve done it. I didn’t want that anymore.”

“He’s a pleasure to work with. Much more mellow,” Richards’ bandmate Ronnie Wood said he noticed changes in Keith’s behavior since cutting down on the drinking in the Rolling Stone interview. “He’s open to more ideas, whereas before I’d kind of grit my teeth and go, ‘He’s gonna give me some shit for saying this.’ Now, he’ll say, ‘That’s cool, man.’”

Richards said, “it was interesting to play sober.” Woods added, “We’re weaving [guitar parts] a lot more conscientiously now. We’re much more aware of the gaps and the spaces between. We’re in our seventies, but we’re still rocking like we’re 40-year-olds, you know?”

“It just wasn’t working anymore, you know,” Wood said of Keith’s boozing. “I think the Keith that we used to know and love had this cutoff point where if he had one more, he’d go over the top and he’d be nasty. The cutoff point became shorter and shorter, you know, and he realized that.”

“I was lucky to get on the wagon when I did and was ready for all the stuff that came at me, cancer and all that,” Wood said of his sobriety that began in 2010 and his cancer scare in 2018. “Luckily it was all in one place and I had it removed. I got my life again – I got a second chance and my little girls and my whole life now is so much better. I think Keith is seeing that kind of thing as well. And then he went on to the beers for a while, he cut down slowly, and now, you know, good luck to him. If he’s gonna keep it up, I’ll be there, full support.”

However, Keith admitted that he’s not going completely sober and conceded that he will still have “a glass of wine occasionally, and a beer.” Let’s see how Richards’ new-found sobriety works for him once The Rolling Stones kicks off their North American leg of the No Filter tour, which begins in Miami in April of 2019. Being on the road with his fellow bandmates and living the rock star life may present some difficult temptations.

The drawback for the 74-year-old Richards is that he will be on less “who-is-most-likely-to-die” lists by cutting booze out of his life.

I was number one on the who-is-most-likely-to-die list for 10 years. I was really disappointed when I fell of the list! #BBCKeef

Some doctor told me I had six months to live and I went to his funeral. I’ll write all your epitaphs! #BBCKeef

This is quite the different tune by Richards who would tease fellow rocker Alice Cooper because of his sobriety. Rolling Stones’ member Ronnie Wood was talking with Cooper who reminisced about Richards’ joking with him years ago. Richards asked Cooper, “How long has it been since you’ve had a drink?” Cooper responded, “It’s been 20 years,” and Keith replied, “It begs the question… why?”

We leave you with Out Of Control performed by The Rolling Stones live in Havana, Cuba. Good luck to Keith and his somewhat sobriety!