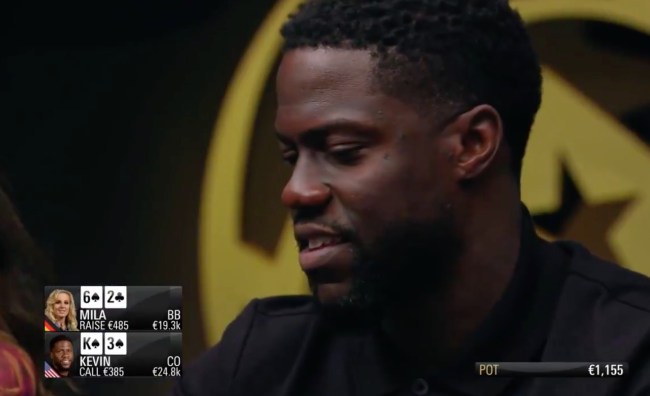 Kevin Hart is a pretty skilled poker player. I work from home and have the TV on all day in the background while I fire up these articles for you bros. Yesterday, I caught 3 or 4 hours of Kevin Hart playing in the High Roller tourney where he legitimately held his own with some of the most seasoned pros in the game. It was impressive. He had a pretty clear strategy which we could see because we could view Kevin’s cards. He stuck to that strategy. And he won some massive pots.

Below, Kevin Hart wins $40K cash in the PokerStars Championship Cash Challenge Series with nothing but a King high. I tried to find this video on YouTube but I could only find it on Twitter. If the embed is not loading for you then you can access the tweet directly here. Also, as always, you can find me on Twitter at @casspa.

You can see a complete explanation of the hand’s play over on Poker News but I’m the type of person who’d rather watch the video of the hand unfolding than read about a replay. Essentially, Kevin Hart wasn’t willing to get bullied in a hand where he sensed weakness based on a discernibly weak pattern of betting. This wouldn’t be totally out of character if it was a tournament and the chips were all funny money but this was straight cash. Imagine trying to stay in that hand when you’re playing with actual cash money on the table. I’d be sick.