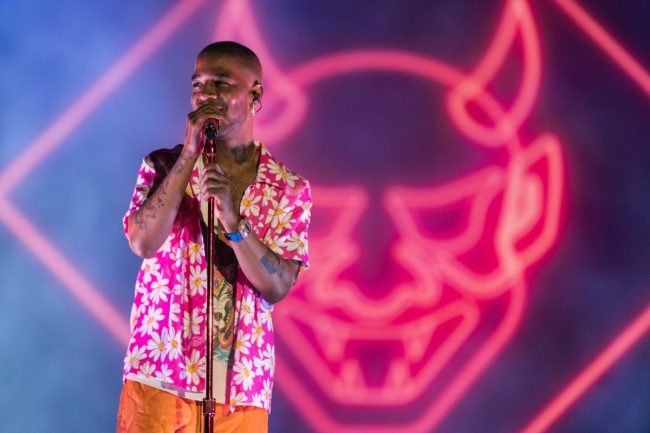 Kid Cudi was a late substitution to this weekend’s Rolling Loud festival in Miami, taking the place of Kany West, who was a last minute no show. After scrambling, the concert venue was able to add Cudi to the set list which didn’t necessarily sit well with Kanye fans.

The two rappers have a beef that goes back to Kid Cudi’s friendship with Pete Davidson, who now dates Kim Kardashian. West cut ties with Cudi, saying in a message on social media that he’d no longer be affiliated with his Donda brand.

“Just so everyone knows Cudi will not be on Donda because he’s friends with you know who.”

With Kid Cudi taking Kanye’s place as a headliner this weekend, things turned ugly. Fans in the crowd began throwing trash on stage, with the rapper once being plunked in the face with debris mid-song.

He then stopped the concert, saying if another piece of trash was thrown, he would walk off stage.

Cudi’s short appearance wasn’t the only drama of the event, though.

Kanye West shows up to perform after Kid Cudi’s exit

After bailing on his original slot, Kany West wound up showing to play with Lil Durk.

The irony of him performing FSMH after what just happened ☠️☠️

Ye’s surprise performance came just moments after Kid Cudi left the stage. Almost as if it was scripted. It certainly adds even more fuel to the flame in this ongoing rap beef.