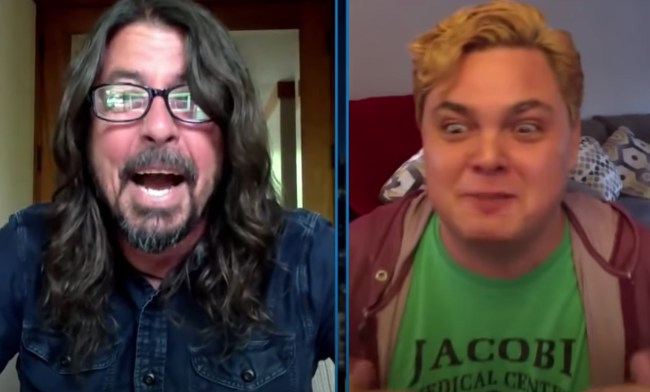 If you are looking for a feel-good moment today then Dave Grohl and Jimmy Kimmel have got you covered. Jimmy hosted emergency and trauma nurse TJ Riley from Jacobi Medical Center in The Bronx as a guest on Jimmy Kimmel Live and made his year.

TJ’s a diehard Foo Fighters + Dave Grohl fan, he was the first person in his unit at Jacobi Medical Center to get sick with the virus, and 60% of the staff have now experience the virus. Jimmy Kimmel brought TJ on to discuss the state of things at the hospital, what TJ’s symptoms were like, who takes care of nurses when they’re sick, and more.

Then Kimmel announced an Ellen-esque surprise and brought Dave Grohl on as a surprise guest, told TJ they’d be sending gift bags to him and his coworkers, TJ was getting ten grand, and Dave Grohl then performed a rare acoustic version of ‘Everlong’ by the Foo Fighters.

It’s pretty impressive how these Late Night TV talk show hosts have managed to keep it fresh every night while they’re all filming from home in isolation. I have to imagine the time they’re spending using Zoom every day on conference calls with their writing staff is exponentially longer than the time they’d normally spend in the office if they were working at the studios like normal.

Anyway, Dave Grohl’s just a great guy all around so seeing him make this fan’s year isn’t a surprise but it’s still nice to see good people doing good things, even if it’s a small gesture on their behalf it meant the world to that nurse whose been fighting the virus for weeks.