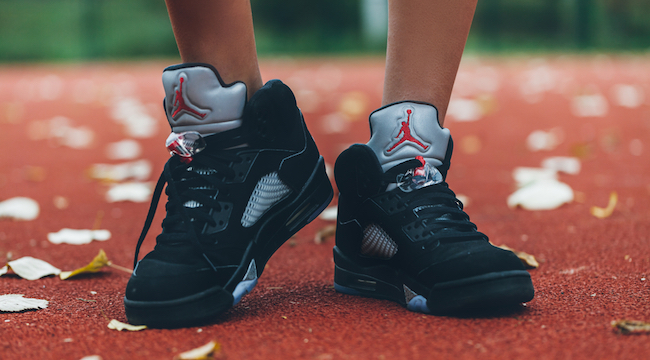 Alongside the Nike Swoosh and Adidas’ Three Stripes, the Air Jordan Jumpman is one of the most iconic images to ever appear on a piece of sports apparel. The logo was based on a picture from a photoshoot Michael Jordan did for Life magazine in 1984 (he was wearing Converse sneakers at the time) and first appeared on the Jordan III four years later.

I’m pretty sure people have been making fake Jordans since Jordans first hit the market, and it’s incredibly easy for consumers to get bamboozled thanks to the number of fairly convincing replicas you can buy from sketchy websites online. There are countless message boards devoted to helping people figure out whether or not the pairs they’ve acquired are authentic, which are filled with disappointed people who are forced to live with the reality that Chinese sweatshops usually don’t accept returns.

New York Times reporter Chris Buckley shared an image that was apparently taken in the wake of Singles’ Day, which is China’s equivalent of Black Friday (although I don’t think any company in the United States have ever offered a lifetime supply of alcohol).

As you can see, there’s clearly something a little bit off about this Jumpman (besides the apparently deformed feet).

After doing a little bit of research, I discovered that this photo might have been originally posted all the way back in 2013, and there are multiple people who have flocked to Reddit to share similar pictures.

I just realized I made it through this entire post without saying “What are thoooooose?” so let me use this sentence to right that wrong. It might not be 2015 anymore, but some memes are truly timeless