The Most Terrifying Sporting Event Ever: Lacrosse Bravehearts 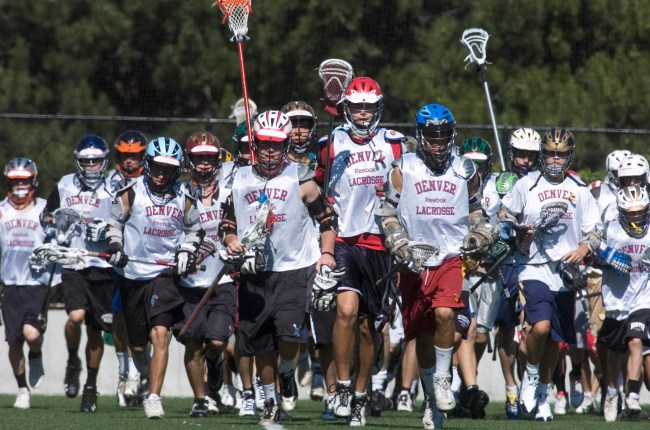 Picture this: Princeton lacrosse camp, 2003. It’s day three of five, and it’s 94 degrees. The baked ziti from the dining hall, now a congealed brick in your stomach, is trying to decide whether it’s coming or going. Your team had to flip your sweet reversible pinnies to black for this game, and the sun found you pretty quickly. The game ended in a tie so it’s Braveheart time. Legendary Princeton coach Bill Tierney came down from his ivory tower to watch this. Your team selected you because you have the best nickname: Big Red. You walk from the sideline to the faceoff X, solemnly acknowledging the appointed tribute from the other team. You can’t swallow and there’s a creeping, hot sensation crawling from your feet to your neck. You hear your breathing inside your helmet and it’s already thunderous, even though you’re walking. Some sophomore from the Princeton men’s team—wearing flip flops, a visor, and a whistle on a lanyard—is preparing to place the ball and walk you through the faceoff motions. You’re not a faceoff guy, never have been, never had the stomach for it. You get down, set up your stick and try not to jump the gun. But your hands are shaking. Down… set…

A lacrosse “braveheart” is the most terrifying thing I’ve ever done in sports. It’s a diabolical way to decide lacrosse games when you don’t have the time for a proper overtime. You really only see it at summer lacrosse camps, or maybe in beer leagues. It’s the perfect way to traumatize a 12-year-old kid into hating the sport forever.

The setup: each team puts one man forward, plus the goalie, to play a full-field one-on-one until someone scores. They strip away the other 16 other guys that usually populate the game and you’re on your own, entirely alone, the entire game riding on your ability to not puke.

Some people are built for that moment. Jordan and Kobe and Robert Horry could have picked up a lacrosse stick any day to win a Braveheart with no knowledge of the game, simply because they could keep their nerves under control. I wasn’t built that way though. I had to do three of them in my life, over the years of lacrosse camps. My record is 2-1 and I can remember every step, every cradle, of each one. To this day, the Braveheart that I lost is the most disappointed I’ve been in myself. You’ll never feel like you’ve let someone down more than after losing a Braveheart for your team. Sure, my parents have never found me slumped on the floor of a portapotty at the Kentucky Derby wearing half-digested strawberry shortcake and budlight as a bib, but even then, I’d still give the nod to my failed Braveheart.

The faceoff is crucial. If you’re going up against a really good faceoff guy, you might as well relinquish it to him and drop back to play defense. Usually, faceoff specialists aren’t great at stick-handling or playing offense, so you’re better off trying to strip him or force him to take a bad shot. After that, you gotta get your goalie involved. Bring him up the field with you and play 2-on-1. Take your damn time, but know that you should be the one to shoot. Goalies can’t shoot for shit with those massive hammock spoons they play with.

The rules can vary. If your goalie can’t come over midfield with you, you’re on your own. In this case, catch your damn breath. Two trips up and down the field and you’re toast. Toast! It becomes a war of attrition and it gets ugly fast. Deep, shuddering, haggard breaths won’t help. You both start to walk as your respective benches go nuts: “suck it up! He’s tired too!” Yeah motherfuckers, I’m about to die. Quiet down and let me rip a sidearm prayer from 20 yards.

Of course, the two bravehearts I won? All time. All time sports moments right there. I don’t know if there’s any place I’d rather be than at the bottom of a pigpile that I caused. I don’t know why I remembered this now. Maybe it’s because college lacrosse was cancelled. Or maybe it’s the respiratory illness that has brought the world to its knees, just as my three Bravehearts rendered me so out of breath that I collapsed to the ground. But I’ll never forget the feeling of walking out to the center X, my team screaming encouragement behind me, wishing I had chosen chess camp instead.

Here are a few other Bravehearts on YouTube, but that one up top is the closest to my memory.