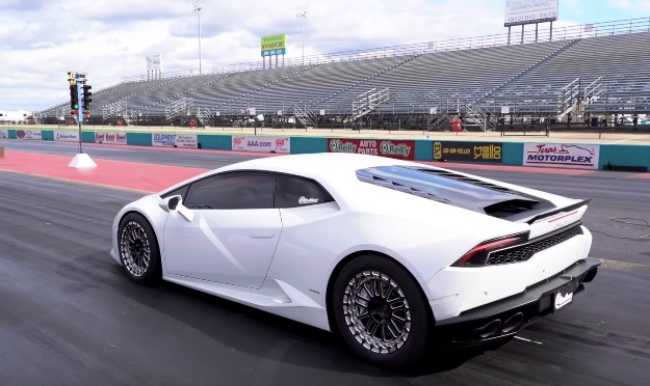 This Lamborghini Huracan is out to stake a claim as the fastest car around. Its rival, the R35 Nissan GT-R, is lightning fast in the quarter mile but the Huracan’s not playing second fiddle to any car.

I’m typing all of this just minutes before I’m about to shut down my computer for the night and hop into my Mazda SUV that’s slower than molasses. Am I dreaming of a former life when I was driving a car that was quick as hell off the line? Not really, no. Because I’ve never even had the slightest inkling of what it feels like to 0-to-130mph in 4.4-seconds.

The quickest car I’ve ever had the chance to drive was either a manual 6-speed turbo-charged S6 or a Maserati, but I only got to open up the first off the line. The latter I was parking for my buddy’s dad at the golf course.

How did I get so sidetracked? Moving on…

According to CarBuzz, Dallas Performance is the team behind this modded 2000-HP Lamborghini Huracan. They’ve added 18-inch drag radials which have drastically increased performance.

I’m slightly confused because the CarBuzz article linked above states this took place at a drag track in Florida but it very clearly says ‘AAA Texas’ on the walls and that’s definitely the Texas Motorplex in Dallas. Was there another recent event where this modded out 2000-HP Lamborghini Huracan ran and if so, can I see that footage?