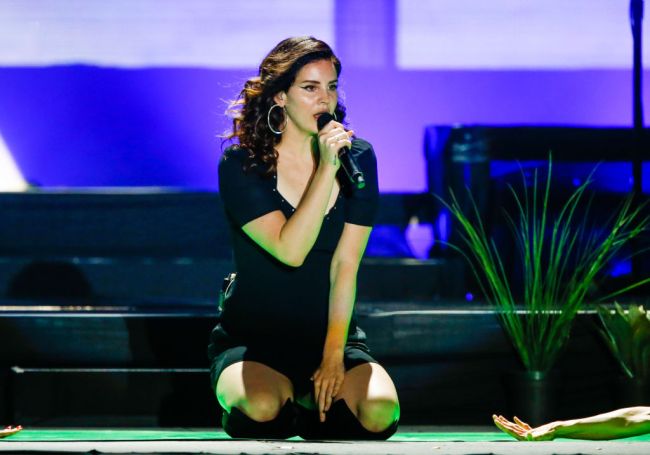 Lana Del Rey has a new album and lucky for her and the sales department, there is some “controversy” tied to it, which always helps with publicity. On Sunday, the 35-year-old singer unveiled the cover art for her new album, Chemtrails Over the Country Club. “There’s always turmoil and upheaval and in the midst of it, there’s always beautiful music too. Introducing my new album chemtrails over the country club,” Del Rey wrote on Instagram.

The black-and-white album cover features a grinning Del Rey joined by a group of her friends at a circular table with a picnic tablecloth. Seems harmless enough, right? WRONG! This is 2021, you MUST be outraged 24 hours a day, seven days a week – even about innocent album covers.

Online critics and the PC police pounced on Lana Del Rey for having an alleged “lack of diversity” on the album cover. BuzzFeed attempted to bring clarity to the situation and somehow made the muddied waters even murkier.

“However, fans instantly took issue with the comment and accused Lana of centreing herself and ‘white fragility’ in a conversation about diversity as opposed to learning from the criticism she’d received,” explained the “media outlet” that often writes quizzes like, “Tell Us Your Favorite Subject In 5th Grade And We’ll Tell You The Color Of Your Dumps.”

“Centreing herself and ‘white fragility’ in a conversation about diversity?” What does that even mean and how did they devise that word salad? Hmmm…

LDR defended her innocuous album cover by saying, “I also want to say that with everything going on this year! And no this was not intended-these are my best friends, since you are asking today. And damn!,” the singer wrote in the since-deleted comment, according to Entertainment Weekly.

“As it happens when it comes to my amazing friends and this cover, yes, there are people of color on this record’s picture and that’s all I’ll say about that. But thank you. My beautiful friend Valerie from Del Rio Mexico, my dearest friend Alex and my gorgeous friend Dakota Rain as well as my sweetheart Tatiana,” Del Ray punched back at the fauxrage. “These are my friends, this is my life. We are all a beautiful mix of everything – some more than others, which is visible and celebrated in everything I do.”

“In 11 years working I have always been extremely inclusive without trying to,” Lana said, and she really should have stopped right there because it was all downhill from this point on.

“My best friends are rappers, my boyfriends have been rappers,” Del Rey exclaimed. Is she saying that “diversity” comes from having “rappers” as friends? Why can’t having doctors or lawyers as friends bring diversity? Sounds a bit tone-deaf.

Lana Del Rey continued and it did not get better.

“My dearest friends have been from all over the place, so before you make comments again about a WOC/POC issue, I’m not the one storming the capital, I’m literally changing the world, my putting my life and thoughts and love out there on the table 24 seven. Respect it.”

How did we go from the cover art of Lana Del Rey’s new album to criminals storming the U.S. Capitol building in a few short sentences? Because everything is preposterous right now, that’s how.

No offense to Lana Del Rey, she makes fine music, but unless her new album cures coronavirus, is it really “changing the world?”

Here is the track list of 11 songs on Chemtrails Over the Country Club. I can’t wait for the fake outrage over the songs: White Dress, Tulsa Jesus Freak, and Let Me Love You Like A Woman.

RELATED: Lana Del Rey Comes Out Against Furries: ‘I’m Not A Furry, You Guys Are Gross’