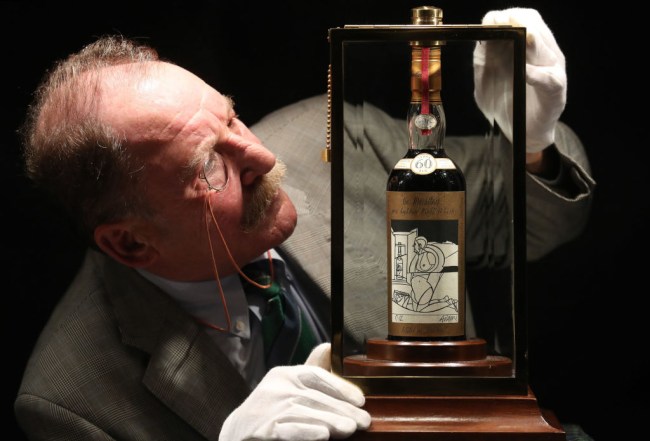 More than 1,600 bidders from 56 countries participated in a massive auction featuring the world’s largest private whisky collection. The Whisky Auctioneer put up 1,932 bottles of glorious whisky in their auction titled “The Perfect Collection – Part One.”

Whisky Auctioneer, which is based in Perth, U.K., ended its auction of distinguished spirits on Monday (February 17, 2020). At the end of the auction, the whisky sale totaled $4,277,000. The collection previously was owned by American whisky aficionado Richard Gooding, who lived in Colorado before he passed away in 2014.

The highlight of the auction was a bottle of the highly-coveted Macallan 1926 Valerio Adami 60 Year Old, which sold for $1,072,000. The sale broke the previous world record, and Whisky Auctioneer is the first online whisky auction house to sell a spirit for over $1 million. The final winning bid came from a buyer in Europe. Hopefully, this person is buying their favorite BroBible writer an early birthday present.

There are only 40 bottles of Macallan 1926 60 Year Old. There are special edition bottles that have artwork from British artist, Sir Peter Blake, who created the iconic cover art for The Beatles’ Sergeant Pepper’s Lonely Heart Club LP. The record-breaking bottle that sold was one of 12 bottles that had label art created by Italian painter Valerio Adami.

“Macallan distillery had been responsible for its own bottling for six years when the decision was made to remove this incredible 60-year-old whisky from their warehouses in 1986, but they were already acutely aware of when reverential treatment was due to a certain product, and the ceremony with which to carry this out,” Whisky Auctioneer said of the rare Macallan whisky. “So much so in fact, that cask #263 was deemed too good to be confined to a single presentation.”

Macallan’s Speyside distillery in Scotland has been in operation since 1824.

Other impressive spirits sold at the auction include a bottle of The Macallan 1928 Anniversary Malt 50 Year Old sold for a record $119,863, obliterating the previous record of $30,000. A Macallan 62-year-old Lalique set a record hammer price at $69,550.

A bottle of the Old Orkney Real Liqueur Whisky from the Stromness Distillery in Orkney released in the 1930s sold for $33,891. A bottle of the Ardbeg 1974 Double Barrel 2 sold off for a record $27,705. Remember, this was all owned by one man. No one man should have all that power.