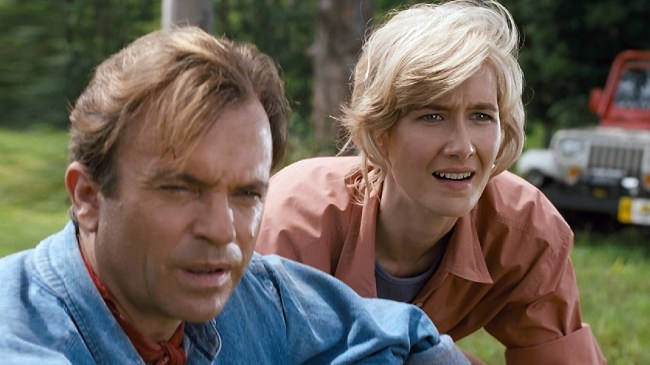 Speaking to reporters ahead of the release of Jurassic World: Dominion, Sam Neill and Laura Dern — who co-starred in the original film as Dr. Alan Grant and Dr. Ellie Sattler and will be reprising their roles in the upcoming sequel — had to defend the fact that the original Jurassic Park featured a romantic subplot between two characters who were 20 years apart in age.

Released in 1993, Dern was around 26-years-old at the time Jurassic Park hit theaters, while Neill was around 46-years-old.

“At the time [it] was a completely appropriate age difference for a leading man and lady,” Neill said. “It never occurred to me until I opened a magazine and there was an article called ‘Old geezers and gals’. People like Harrison Ford and Sean Connery acting with much younger people. And there I was, on the list. I thought, ‘Come on. It can’t be true’.”

Dern said it felt “completely appropriate to fall in love with Sam Neill” at the time, “and it was only now, when we returned in a moment of cultural awareness about the patriarchy, that I was, like, ‘Wow! We’re not the same age?’” [via The Sunday Times]

The latest and final (for now) film in the Jurassic franchise, Jurassic World: Dominion, will hit theaters in the United States on June 9, 2022. The film will see both Dern and Neill reprise their roles as Dr. Ellie Sattler and Dr. Alan Grant for the first time since 2001’s Jurassic Park III.