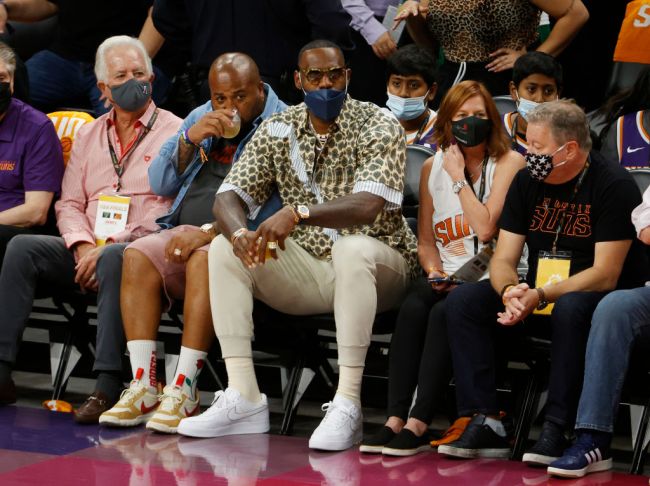 LeBron James is probably one of the few people who can bring their own liquor bottle to an arena and not get kicked out.

During game 5 of the NBA Finals, many fans noticed LeBron, who was seen sitting courtside to support his close friend Chris Paul, had a bottle of Lobos 1707 tequila which he co-owns with severe other NBA players.

Hey @suns are fans aloud to bring in their own alcohol? Just curious pic.twitter.com/5znw36nfzV

After fans noticed the half-empty tequila bottle LeBron implied that he snuck the bottle in without the NBA’s knowledge.

Of course, fans had interesting reactions to LeBron bringing his own tequila bottle to the game.

Ridiculous double standard. Anyone else would be arrested for bringing their own liquor/ glass bottle in. And nice wide stance to infringe upon that ladies personal space next to him. Always all class, Bron… 🙄🙄

No one is allowed to have a glass bottle nowhere in the Arena, let along on the court. So LeBron sneak it in the Arena and out to the court.

I’m bringing my own next time I go to the arena, let’s see if I can😂