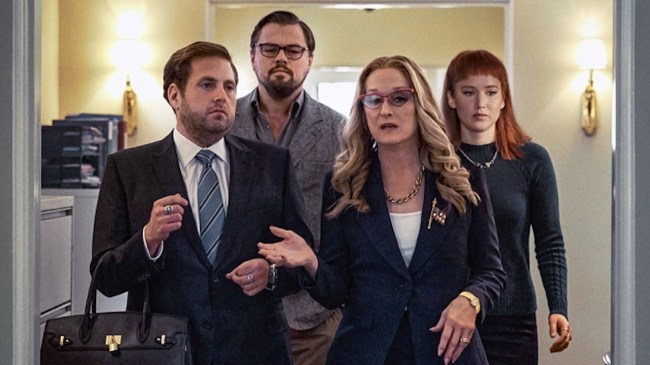 When it comes to American actors, there is not a single performer over the last half-century that’s more iconic than Meryl Streep. Since beginning her career in the 1970s, Streep has racked up a genuinely mindblowing 21 Academy Award, which is good for most of all time.

Despite the 21 nominations, Streep “only” has three wins — behind only Katharine Hepburn for the world record — which just doesn’t make much sense. It certainly wouldn’t shock me if she scored another Best Supporting Actress nomination for her work in Don’t Look Up.

Due to this legendary status, though, fellow acting icon Leonardo DiCaprio was incredulous about the idea of Streep having to do a nude scene for Don’t Look Up, body double or not.

According to writer-director McKay in a new interview with The Guardian, the scene in question involves Streep, who plays the unorthodox (and highly skeptical) President Orlean, in a comic moment of undress.

“She is fearless. And yes, that is a body double. But you know who had a problem with it? Leo [DiCaprio],” McKay said. “Leo just views Meryl as film royalty … although maybe royalty is not a compliment … but as such a special figure in the history of film. He didn’t like seeing her with the lower back tattoo, walking for a second naked. He said something to me like: ‘Do you really need to show that?’ And I was like: ‘It’s President Orlean; it’s not Meryl Streep.’ But she didn’t even blink. She didn’t even bring it up.” [IndieWire, via The Guardian]

RELATED: Jennifer Lawrence Details The ‘Hell’ Of Working With Leo DiCaprio on ‘Don’t Look Up’