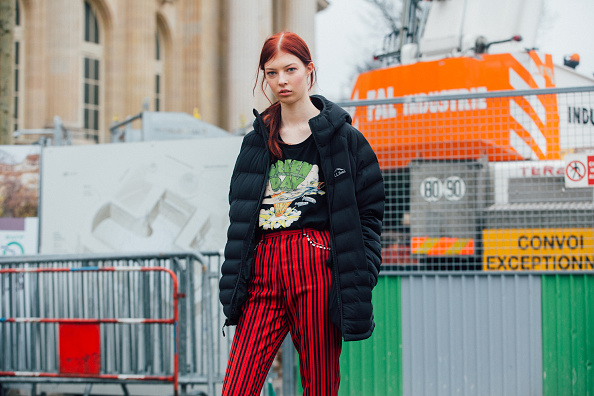 LL Bean is the greatest clothing manufacturer in the world. Let me know if you’d like some almond milk with that truth. The green machine is the defining landmark of my hometown of Freeport, Maine.

I have an LL Bean credit card. I exclusively wore LL Bean clothes from 1st grade until 6th, when I added Gap. I used to go to the camping section with buddies at 2AM to drink beers in the tents (the store is open 24-7, 365). Every present I give to people at Christmas is purchased on Christmas Eve at LL Bean.

The store is 2.2 miles from my childhood home. I know where the best parking spaces are and I know which bathrooms are the cleanest. Suffice it to say, LL Bean is very personal to me.

When I read that LL Bean would be featured in Todd Snyder’s upcoming NY fashion week runway show, I was exultant. Beans has made a concerted effort of late to add more fashion-forward clothes to their racks, including more slim-fitting shirts and trendier pants. Where before, middle-aged husbands and wives could shop in the same aisle for androgynous jeans to share, now Beans had gender-specific clothes.

Snyder must have seen this, for he has incorporated our beloved outdoor apparel into that edgy, cosmopolitan arena of New York high fashion, ushering in a new day for this trendy, manly 30-year-old Freeport native.

NY Times– Thus, for the first time in its 108-year history, L.L. Bean will appear on a runway, as a core element of Todd Snyder’s fall men’s wear show, the tent pole event of New York Fashion Week: Men’s.

But as any true New Englander will tell you, within every orchard, you’re bound to find a few bad apples…

“I thought putting a shawl collar on the Norwegian sweater was about as far as things could go,” [the author of The Official PreppyHandbook] Ms. Birnbach said.

For her, the notion of L.L. Bean appearing in a fashion week presentation amounted to “an essential conflict on a molecular level.”

“I mean, are they fashion or are they gear?”

This collision of seemingly disparate worlds sent thousands—nay, tens—of angry Bean puritans to their keyboards. Like Ms. Birnbach, the confusion over whether Bean was now fashionable or “gear” (as one cannot be both) caused a panic. From there, they launched salvo after salvo of opinions that add so much value to our world.

Yeah CheezWiz, I bet you’re a Dedicated Follower of Fashion. Especially since you capitalized that credit like you’re on the board of this made-up club. And yes, I’m sure the bigwigs at Beans will love the idea of returning to their sustainable roots by encouraging consumers to purchase their used goods on eBay. Talk about revenue! That’ll help the business—watching clothes they sold 30 years ago get sold again on eBay by God knows who. If only they’d thought of that tactic earlier!

Hand up, I was entirely unaware that Abercrombie was ever known as “sturdy outdoor clothing.” The sleeves of their polo shirts rode so damn high, as if to prepare the wearer for a flu shot at any given moment. It wasn’t the sort of stuff you’d throw on for white water kayaking. But Neal, if you ever disgrace the good name of Linda Bean again, I will be forced to come to Arizona and go door to door asking for Neal until I find you. Or you could just meet me at a designated spot and we could hash this out, man to man, like the two preserved moose that Beans used to have on exhibit near the stairs between the pet department and the camping section.

I… I’m not sure what to make of this one. Flabbergasted, really. Is he wearing the women’s pants? I was joking about that earlier. Or maybe he’s buying the pants for women as a gift? Goodness, blonde guy, send us some answers.

Awww fuck off Allen, you sad bitch. Seriously, grow up and get outside. Listen to some fucking music. Worst attitude in the fucking world.

These are the same people who abused the hell out of LL Bean’s famous lifetime return policy. They’d buy a pair of blue jeans, wear them for a decade of roofing and field labor, and then return them full of cigarette burns and dip spit stains and say “these broke.” LL Bean would dutifully swap them out for a new pair, and the cycle would repeat until finally, the great company had to change their policy. Which, of course, elicited angry complaints from these same “sturdy New Englanders.”

At the end of the day, we should be proud of LL Bean for finding new territory for their clothes. I hate when people say you should take care of your old customers or some bullshit about loyalty. Evolve, nitwits. The brand is, and so should you.