If You Watch Just One Video Today, Make Sure It Is This Local News Ski Report 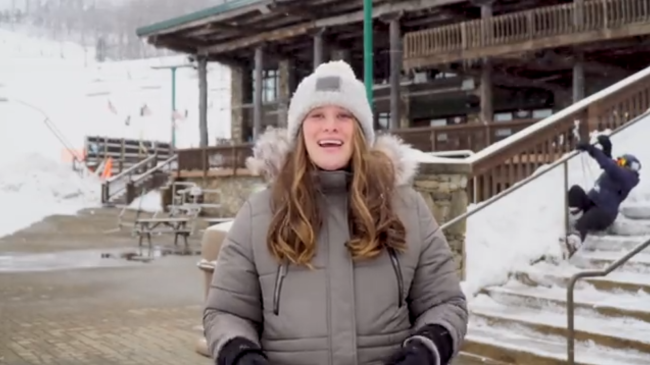 Local news is just the best. They are willing to do things and cover stories that national news organizations either can’t or won’t.

Which means that, thanks to local news, we get things like an awesome “What day is it?” segment, and a kid talking uber-enthusiastically about how much he LOOOVES fried chicken.

Today we head to the mountains of Pennsylvania and the Seven Springs Mountain Resort for a look at what the skiing conditions are like.

In the video, reporter Abbey Way shares the ski report, boasting about the 16 inches of snow that fell, and how “conditions are fantastic right now.”

Unfortunately, there is one skier for whom the conditions are anything but fantastic.

We know this because that person appeared in the background of Abbey’s report shortly after it began.

Just a little over a day since the video was posted to Twitter, it has been watched more than 1.6 million times. There is good reason for that.

As Abbey was explaining how great the conditions are, the person is seen making the most feeble attempt to walk down the icy steps behind her.

This person struggles so badly to remain upright, hanging on to the railing for dear life, dropping their ski poles, before finally getting upright and inching her way down the stairs. And then proceeding to still slip a little on the ice as she gingerly makes her way out of the picture.

Reactions to the video are almost as comical as the video itself. Here is just a small sampling of the best.

If you can't walk across a flat surface-even with using the poles, I dunno if I'd get on the slopes!!

Them: “Conditions are fantastic right now”

The legs straight out is just chef’s kiss, no notes.

Abbey: "I dunno, should we do another take?"

Camera guy: "No, that was flawless. Grade A footage, trust me."

Not sure what you all are laughing at, that’s the totally normal gait of a person walking down stairs in ski boots.

"Here, we see the newborn skier encounter the first obstacle of its young life: stairs.

In a cruel twist of nature's irony, the poles that would ease this arduous journey are within sight...but sadly not within reach." https://t.co/Wm0LsHtsSn

Of course, someone had to say what we’re all thinking…

Possibly, maybe, there was no-one at the camera. She could have set up the camera herself, then handed the tape to an editor who just went, "It's what she wants."

Not going to dig through to see. I like it and not worried either way.

Have you ever been to a ski lodge?
That HAPPENS ALL THE TIME.

Why are people seriously finding reasons to be upset about this? "She could have done another take" for what reason?