A Local News Station In Cleveland Deserves A Pulitzer For This Brilliant ‘What Day Is It?’ Segment 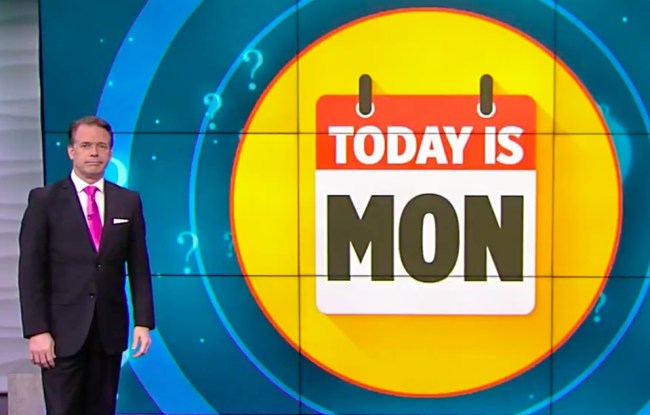 In recent weeks, a lot of people who’ve never worked from home before were suddenly introduced to the joys (and downsides) of tackling your assigned tasks in a location where pants are largely optional, you can stink up the bathroom without a care in the world, and no one will judge you if you crack a beer before the day (or morning) officially comes to an end.

There are some out there who prefer the structure of an office, and though I’ll admit it took me a while to adjust to the state of semi-isolation that people around the world have recently been suddenly forced to adapt to, there are plenty of aspects of working in a collective space that I do not miss one bit.

I can tolerate a certain amount of small talk but find it much harder to put up with people who are fluent in Workplace Chat; the ones who use the phrase “case of the Mondays” without knowing it’s an Office Space reference—as well as “I can’t believe it’s only Tuesday,” which is then followed by their best impression of the Geico Hump Day camel and succeeded by their disbelief that the day they swore was Friday is actually Thursday.

You can be damn sure they’re going to T.G. when the end of the week finally rolls around, though.

However, I will say I’m missing those people ever so slightly these days, as they’d inadvertently provide an invaluable service during a period where I’m increasingly relating to Robin William’s character in Jumanji as my ability to process the passage of time steadily weakens (and my beard and hair grow to resemble his).

Thankfully, people in Cleveland who are having a problem keeping track of where we are in the week can get an assist courtesy of Fox 8, as local news anchor Todd Meany introduced a new segment called “What Day Is It?”

I feel like I shouldn’t have to explain things too much considering the name of the recurring feature tells you what you need to know, but if you require some motivation to watch, it’s like if Anchorman and Tim and Eric had a baby that was only capable of telling you what day of the week it is.

What day is it? The official answer is….. #WhatDayIsIt pic.twitter.com/WrJGVrY1Go

I don’t know what specific awards these might make Meany eligible for but he should be the frontrunner for all of them.