Meet Olivia Jade, Lori Loughlin’s Daughter Who Cheated To Get Into USC When She Really Wants To Be An Influencer 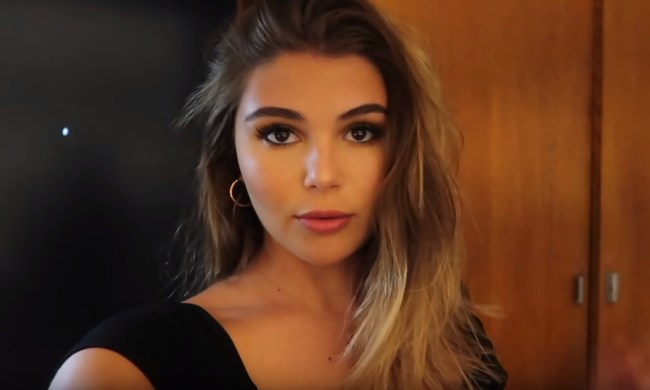 Actress Lori Loughlin was taken into custody by the FBI on Wednesday morning following the bombshell revelations that she was involved in a college cheating scandal. Loughlin is one of 50 people, including fellow actress Felicity Huffman, who were reportedly involved in a nationwide college admissions scam.

The investigation, which was appropriated dubbed “Operation Varsity Blues,” caught 33 parents attempting to cheat the system to get their privileged kids into elite universities such as Yale, Stanford, and Georgetown. The investigation revolves around the Key Worldwide Foundation, which allegedly took bribe money from parents worth $25 million between 2011 and 2018. The foundation, which was run by Rick Singer, was used to bribe sports coaches, test administrators, and college officials.

On Tuesday night, Loughlin flew from Canada where she was filming a Hallmark movie to Los Angeles to turn herself into federal authorities. Lori Loughlin, better known as Aunt Becky from Full House, allegedly paid $500,000 so that her two daughters could get accepted into the University of Southern California.

Loughlin and her husband Mossimo Giannulli are facing conspiracy to commit mail fraud and honest services mail fraud from the college cheating scandal and reportedly could be sentenced 37-46 months if convicted at trial and between 27-33 months if she enters a guilty plea according to CNN legal analyst, criminal defense attorney and University of Georgia Law Professor Page Pate. Several years in jail? My future kids can go to community college.

Loughlin’s daughters, Olivia Jade and Isabella Rose Giannulli, reportedly pretended to be rowing athletes to get accepted into USC. “The two daughters designated as recruits to the USC crew team—despite the fact that they did not participate in crew—thereby facilitating their admission to USC,” says a 204-page criminal complaint against Loughlin that was unsealed in federal court in Boston on Tuesday.

There is no evidence that they are hardcore crew athletes or that they actually made the USC crew team. Despite all of the money and effort that Aunt Becky put into getting her daughters into USC, Olivia Jade wasn’t exactly super stoked about going to college because she already has a career as an influencer on social media.

Olivia Jade Giannulli is the 19-year-old daughter of 54-year-old Full House star Lori Loughlin and Mossimo Giannulli, the 55-year-old creator of the Mossimo beach-inspired clothing line, which was a huge hit in the 90s. The Mossimo brand had a value of $275 million in 1996 when it went public and signed a licensing agreement in 2000 with Target for $27.8 million.

In 2006, Iconix Brand Group Inc. bought the Mossimo brand for $119 million. So Mossimo is wealthy and has some money to spend to help his kids get into college of their choice by more legitimate ways such as donating a building at a university, like every other rich person.

It appears that Olivia Jade is extremely invested in her influencer career, which boasts over 1.3 million followers on Instagram and nearly 2 million subscribers on YouTube (But one has to wonder if her parents bought those followers). And who could blame her? Blabbing about going to college parties on your vlog, getting free sh*t to promote on your Instagram, answering questions about yourself from strangers, and taking trips to Fiji are all better than a calculus exam. Olivia Jade seems like a smart woman.

Olivia is currently a freshman at USC, but doesn’t seem to have the same fervor for her studies as her Instagram. It appears that Olivia’s parents may have pressured her to go to college and maybe even told her to pose for the alleged photos of her rowing to get accepted on USC’s crew team.

In a YouTube video from August of 2018, Olivia Jade revealed that she didn’t really want to go to college. “I don’t know how much of school I’m gonna attend,” she said in the video. “But I’m gonna go in and talk to my deans and everyone, and hope that I can try and balance it all. But I do want the experience of like game days, partying. I don’t really care about school, as you guys all know.” Side note, does she think that “deans” are “professors?” OMG, she does.

But once Olivia did get settled into her new college life she really seemed to embrace it… as a way to promote Amazon products. Loughlin’s daughter shilled for Amazon’s Prime Student program with an Instagram post and YouTube video titled “COLLEGE DORM ROOM TOUR 2018.” At the 2:40-mark of the video she says that the video was not sponsored, but the Instagram photo of the same stuff says “#ad.”

Olivia Jade walked back her comments about college in a vlog on February 5th titled “spend time w me at college! (friends, parties, class, etc).”

“Anytime I do a college video people are like, ‘Why do you only show you going out or getting ready for a party? It’s not only about partying.’ And before I went to college I was super naive and ignorant and dumb and I was like, ‘I’m not going to college ‘cause I want an education, I’m going to meet people and be social and party.’ And like, that’s literally the dumbest thing you can ever say, especially when I have the opportunity to have such a good education. So, it’s not that I don’t show the education part [in my videos] because I don’t care, because now that I’m here it’s actually really interesting and I love it and that’s why I’m still here. I just don’t think it’s that fun for me to film a whole college class instead of you guys seeing the social part of it.”

A day later she tweeted: “YouTube will always be my #1 passion. I promise I’d way rather be filming 24/7 than sitting in 6 hours of classes straight but an education is also super important to me.”

YouTube will always be my #1 passion. I promise I’d way rather be filming 24/7 than sitting in 6 hours of classes straight but an education is also super important to me so thank u for ur patience and letting me figure out time management . Ily bbs

Olivia really seems to love her influencer lifestyle and promoting beauty products from Sephora and Tresemmé. The age-old adage “College isn’t for everybody” seems to apply in this situation. You can’t blame her for her parents’ decision to break the law.

It’s worth noting, Mossimo also went to USC for architecture, but dropped out of school in 1987, a year after starting his fashion line by borrowing $100,000 from his father. How did Mossimo not see this coming from a mile away?