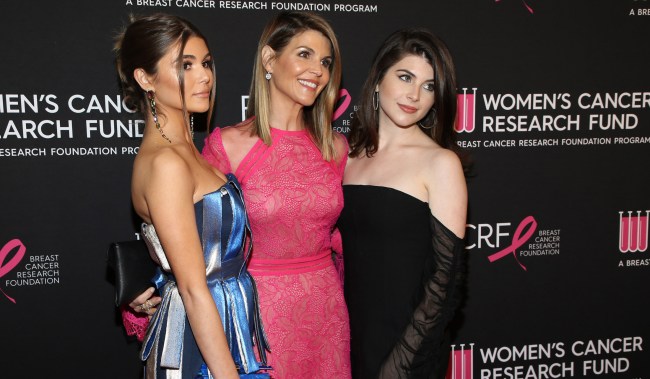 Remember way back on Monday when talking about Michelle Wie getting engaged to Jerry West’s son I wished that my parents were rich and famous?

I said that because, at age 30, Jerry West’s son Jonnie West works in the Golden State Warriors front office and will probably become an NBA GM sometime within the next five years. No way he would be in this position if it weren’t for his dad, unless scoring 138 points in 77 games over four years for the University of West Virginia makes one qualified to land a job in an NBA front office.

Well, today we have another example of how cool it would be to have a rich and famous parent in the form of a nationwide college admissions bribery scam reportedly involving actresses Lori Loughlin and Felicity Huffman.

Loughlin and Huffman have been charged along with over 40 others of paying large bribes to various colleges, including Yale, Stanford, Georgetown, Texas, Wake Forest, the University of San Diego, and USC, to get their kids accepted into the schools, reports TMZ.

The charges include conspiracy to commit mail fraud and honest services mail fraud. We’ve learned Felicity has been arrested and is presently in custody. We’re told she will be released on a signature bond … which essentially is a promise to appear in court.

The alleged scam was reportedly unearthed after authorities found a California businessman who ran an operation helping students get into the college of their choice. Authorities say parents would pay the man a predetermined amount which he would funnel to an SAT or ACT administrator or a college athletic coach.

Specifically, with regard to Loughlin, the Fuller House star and her husband, Mossimo Giannulli, the founder of Mossimo clothing, court documents state they “agreed to pay bribes totaling $500,000 in exchange for having their two daughters designated as recruits to the USC crew team — despite the fact that they did not participate in crew — thereby facilitating their admission to USC.”

As for Huffman, who is married to actor William H. Macy, and is best know for her work on Sports Night, Desperate Housewives and American Crime, it was reported by reports ABC-7 Boston that she and Macy “made a purported charitable contribution of $15,000…to participate in the college entrance exam cheating scheme on behalf of her eldest daughter. Huffman later made arrangements to pursue the scheme a second time, for her younger daughter, before deciding not to do so.”

Federal agents say they have recorded telephone calls of Huffman and emails from Loughlin that show their involvement in the scam.

College athletic coaches and administrators of entrance exams were also among those reportedly arrested.

Guessing this video and others like it posted by Loughlin’s daughter, Olivia Jade Giannulli, is going to be getting a lot of new comments these days.

What are your best “hacks” for the back-to-school season?