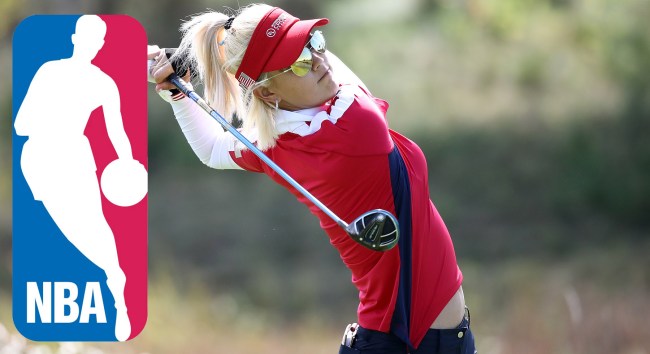 So… what do you think? Will the son of the youngest woman to ever qualify for an LPGA Tour event, Michelle Wie, and the son of a living NBA legend Jerry West, be a scratch golfer who takes the PGA Tour by storm or a first round draft pick in The League?

Either way, this engagement of Wie and Jerry West’s son Jonnie is sure to spawn some very athletic children with tremendous hand-eye coordination.

Wie has been struggling since undergoing surgery on her right hand in October, withdrawing from the HSBC Women’s World Championship last month, but now she has a whole new reason to be interested in that hand. It’s got a big ole rock on it.

“My person for life!!!!!!!!! #WieGoesWest @jonniewest4,” Wie, 29, captioned some photos she posted to Instagram, accouncing the engagement.

As for the 30-year-old West, Jonnie played guard for the University of West Virginia, his famous dad’s alma mater, from 2007 to 2011, scoring 138 points for the Mountaineers… total… in four seasons.

Now his goal is to become an NBA general manager, like his dad – the man who put together the Showtime Lakers and then put Kobe, Shaq and Phil together. Currently, Jonnie is a front office executive for the Golden State Warriors.

Man, I wish my dad was rich and famous.

More pics of the happy couple below… congrats, so happy for you both.