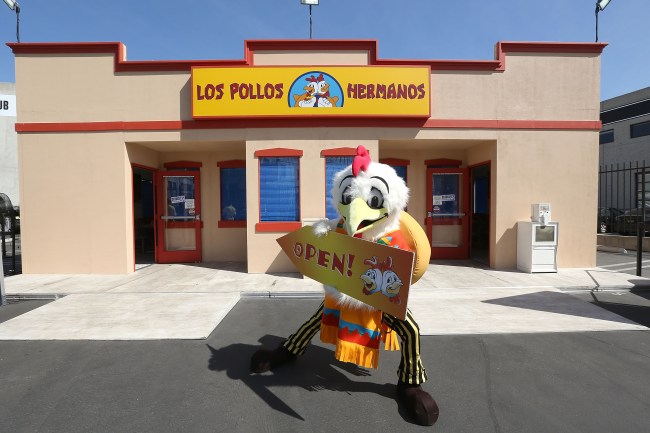 It’s almost hard to believe that Breaking Bad premiered 10 years ago (tomorrow) on January 20, 2008. Time flies. I re-watched all 5 seasons last year as a refresher so maybe that’s why it doesn’t feel so distant for me but it’s still hard to believe that it’s been ten years.

There’s some great news for nostalgic Breaking Bad fans: in honor of the show’s 10th anniversary, a pair of super fans in New Mexico are converting the original Twisters in Albuquerque into a Los Pollos Hermanos. Twisters was a fast food burger chain which was the real-life inspiration for Los Pollos Hermanos and the superfans are going all out for the 10th anniversary with hats, shirts, aprons, and ‘chicken brothers’ mascots according to Nate over at Esquire.

Unfortunately, this pop-up will only last for a few hours. If you want to experience Los Pollos Hermanos at Twisters Burgers and Burritos in Albuquerque you’ll have to get to 4257 Isleta Blvd between 10am and 2pm tomorrow, January 20th, on the 10th anniversary of Breaking Bad premiering.