Lowe’s Customer Complains Employee’s Black Panther Shirt Is ‘Racist’, Returns Next Day To Make Sure He Was Punished 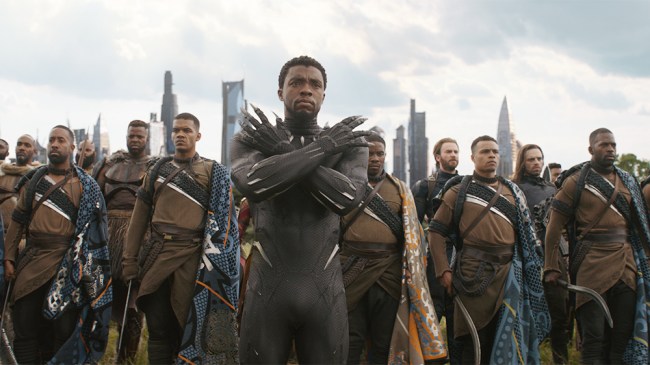 Another “Karen” strikes AND comes back the next day to make sure her idiocy was on full display twice.

A teen employee at a Lowe’s store in Washington was forced to change his tee-shirt reading “Black Panther Wakanda Forever” after a female customer complained the shirt was racist.

Kyle Sales told the local CBS affiliate that a supervisor reprimanded him for the shirt and forced him to either buy a new shirt to complete his shift or go home.

“She goes, ‘A customer said your shirt is offensive and racist,’” Sales said. “This is from a movie. How is this racist?”

After the exchange, Sales went home and put a jersey over his Black Panther movie shirt.

Sales told KIRO 7, “I was very angry. It just did not seem fair in light of all of the things that are happening in our in the world right now. This isn’t racist. I shouldn’t be punished for a t-shirt from a movie.”

Here’s my question – don’t Lowe’s employees wear vests? The back of Sales’s shirt reads “Black Panther Wakanda Forever.” How the hell did she see the back of his shirt with a vest on? Did she follow him around until he took the vest off?

Unfortunately, the issue didn’t end that day. The female customer RETURNED to the store the next day to make sure Sales had been punished.

The female customer who complained wasn’t ready to drop the issue, either. She apparently returned the next day to ask whether Sales was reprimanded for the shirt, Sales had reportedly heard from a friend.

“She came in throwing a fit saying, ‘What happened to that kid; what was his punishment?’” he said.

Sales recently graduated high school and got the Lowe’s job to make money before attending Washington State University in the fall.

The teen told KIRO the incident “triggered painful memories from high school and his previous job.”

“Kids calling you the N-word,” Sales said, referring to his high school experience. “At my last job,” he added, “my manager actually called me a colored boy.”

A Lowe’s spokesperson Sebastian Hale released a statement to KIRO 7:

“Mr. Sales should never have been asked to change his shirt, and we have apologized to him directly. We know this is a teachable moment, and we will take action to coach and train the managers at the store to help prevent this from happening again. Diversity and inclusion are important to our culture at Lowe’s, and we remain committed to fostering an environment where all individuals are safe, treated fairly, valued and respected.”

Another important point needs to be made by Lowe’s brass – this woman who was so dumb she called a Blank Panther shirt racist, then RETURNED to the store to make sure Sales was punished for a Marvel shirt, needs to be punished in some way. She should be banned from all of Lowe’s stores and made to apologize in some way.

As far as I’m concerned, she’s harassing this kid for getting dressed and going to work.