The First Trailer For Pixar’s Gorgeous ‘Luca’ Is Here 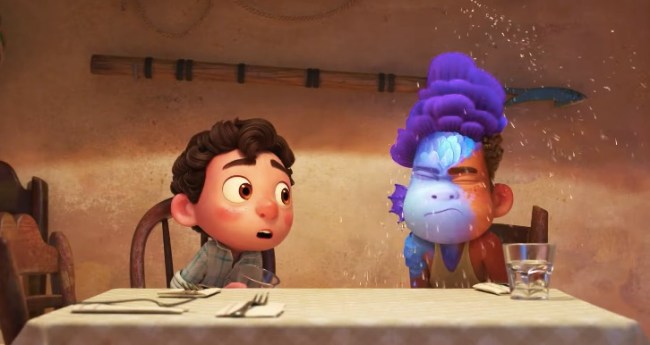 The latest *dive* into Pixar’s beautifully illustrated world is here, as the first trailer for their next film, Luca, has arrived. You thought Pixar’s animation was gorgeous before? Behold… Pixar’s take on Italy’s stunning Almalfi Coast.

I don’t know about y’all, but personally, I’m at the stage of quarantine where this trailer for an animated children’s movie provides the most beautiful landscape I’ve seen in a year. Pain.

At the stage of quarantine where a trailer for a fucking animated children's movie provides the most beautiful landscape I've seen in a year pic.twitter.com/AslMGYJ6xw

Here’s the official synopsis for Luca, via Pixar:

“Set in a beautiful seaside town on the Italian Riviera, the original animated feature is a coming-of-age story about one young boy experiencing an unforgettable summer filled with gelato, pasta and endless scooter rides. Luca shares these adventures with his newfound best friend, but all the fun is threatened by a deeply-held secret: he is a sea monster from another world just below the water’s surface.”

Luca, directed by Enrico Casarosa, is the 24th film produced by Pixar since the iconic animation company released the original and ground-breaking Toy Story in 1995. In the coming years, Pixar will release Turning Red and Lightyear in 2022, an untitled film in 2023, and series such as Monsters at Work, Dug Days, a series following Lightning McQueen and Mater from Cars, and Win or Lose, their first-ever *original* series (set to his Disney+ in the Fall of 2023).

Given Disney’s willingness to release other animated films such as Soul and Raya and the Last Dragon on Disney+, perhaps Luca will also debut on streaming if movie theaters don’t return by summer.