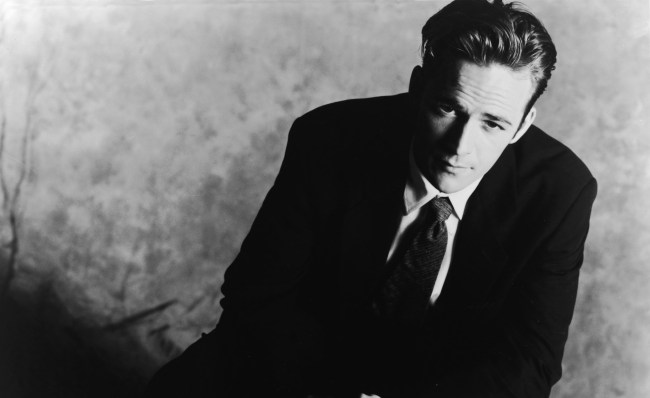 For people of a certain age (which now includes two generations, but especially the older one), this news is going to come as a major shock: actor Luke Perry of Beverly Hills, 90210 fame is dead at age 52 after suffering a massive stroke on Feb. 28.

Perry’s stroke came in the same 24-hour window that Fox announced a Beverly Hills, 90210 reunion series set for six episodes with Jason Priestley, Jennie Garth, Ian Ziering, Gabrielle Carteris, Brian Austin Green and Tori Spelling all returning. Perry was not named as one of the returning cast because he was in the middle of a career resurgence, working full time on The CW show Riverdale, but was expected to appear when available.

“Actor Luke Perry, 52, passed away today after suffering a massive stroke,” read a statement from Perry’s rep. “He was surrounded by his children Jack and Sophie, fiancé Wendy Madison Bauer, ex-wife Minnie Sharp, mother Ann Bennett, step-father Steve Bennett, brother Tom Perry, sister Amy Coder, and other close family and friends. The family appreciates the outpouring of support and prayers that have been extended to Luke from around the world, and respectfully request privacy in this time of great mourning. No further details will be released at this time.”

Reactions to Luke Perry’s passing are pouring in from stars around world.

Luke Perry was a kindhearted and incredibly talented artist. It was an honor to be able to work with him. My thoughts and prayers go out to him and his loved ones.

Dearest Luke,
I will forever bask in the loving memories we've shared over the last thirty years. May your journey forward be enriched by the magnificent souls who have passed before you, just like you have done here, for those you leave behind.

My heart is broken. I will miss you so much Luke Perry. Sending all my love to your family. ❤️ #LukePerry

Too soon. You have left our hearts broken. You will be missed. RIP #LukePerry #gentleman #actor #class pic.twitter.com/nfOPzL87tN

The first time I met Luke Perry we talked about what kind of movie we wanted “Buffy” to be. I asked if he’d ever seen “Near Dark” and he gave me a look of HOW DARE YOU SIR and I knew we’d get along. Funny, committed, and always gracious. He shouldn’t be gone.

So shocking so young! RIP sweet Luke. My love goes out to your family and friends. “Luke Perry passes away just days after the Beverly Hills 90210 star was rushed to the hospital” pic.twitter.com/lkTlKbh8Fj

OMGOSH, no! NO! NOOOO!#LukePerry
Sending so much love to his friends and family. I grew up on 90210...I have never met Luke but have only ever heard the nicest of things. #dylanmckay

Publicist: Luke Perry has died at 52 after suffering stroke (from @AP) https://t.co/GBELwjhreh

The 90’s took a hit today. So fucking awful. Luke Perry and Keith Flint of Prodigy. Two icons that were apart of my life growing up. Never met either of them but only heard great things about both. Rest In Peace. You made so many people happy. 🙏 ❤️

Luke Perry, you were such a good man. Damn. Love to his loved ones.

Crushed. Luke Perry was truly a great guy. Warm, kind, generous and hard working. We met very young, I witnessed the grace with which he became a pop icon & parent. He’s been an awesome example of how to stay decent in a swirl of crazy. Love to his family❤️ https://t.co/bGlTX8mNbB

Luke Perry was a great actor and truly one of a kind. Watching him on 90210 was one of the reasons why I wanted to move to LA. Thinking of his family and friends on and off the set. Rest in peace.

Such a lovely guy. With a wonderful sense of humor about fame and the pitfalls of Showbiz. This is just awful. #RIPLukePerry https://t.co/MtIviZC8uv

Luke Perry – Irreplaceable beautiful and kind human being, incredible friend, generous actor and adoring father to Jack and Sophie and loving partner to Madison we are all heartbroken. You are the love and you are the light. pic.twitter.com/X3ycTvmXsb