Macaroni And Cheese Is Not A Thanksgiving Side Dish 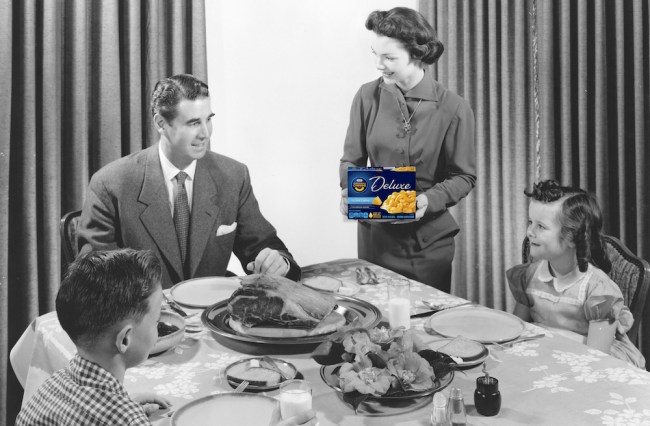 Turkey is synonymous with Thanksgiving. Abundant in the Massachusetts area at the inaugural holiday meal, the turkey wasn’t the main protein on the table. Venison, wild hens, and even fresh seafood was served at the first Thanksgiving meal.

A version of stuffing possibly appeared at the first Thanksgiving, but Plymouth colonists didn’t have access to white flour or butter, so the concoction looked much different than the common Stove Top fare. Early cooks used chestnuts, herbs, and onion chunks to stuff the birds before cooking, and the combination evolved into today’s turkey stuffing.

According to Smithsonian magazine, green bean casserole is “the perfect recipe for post-War America, when cheap, fuss-free cooking was all the rage.”

So, where’s the origin story and rich history of macaroni and cheese as a Thanksgiving side dish?

No one knows. In fact, no one really knows the origin of macaroni and cheese.

According to Food52, in 1769, the book The Experienced English Housekeeper, by Elizabeth Raffald, included a recipe mixing béchamel sauce with cheddar cheese poured over a noodle casserole with breadcrumbs and Parmesan.

Thomas Jefferson and Kraft Foods might be to blame for Macaroni and cheese making appearances on Thanksgiving tables.

Jefferson got addicted to pasta dishes while visiting France, became enamored of fashionable pasta dishes served there. The president noodle recipes and a pasta machine back with him from the trip.

“It’s one of those dishes that we turned into a uniquely American thing,” explains food historian Tonya Hopkins.

“Turned it American” is a nice way of saying made it cheap and highly caloric.

In 1937, Kraft Foods introduced boxed mac and cheese. The product flew off shelves in the middle of the Great Depression. One box served four people and cost just $.19. Kraft sold 8 million boxes of Mac and cheese in the first year alone.

The appeal of the Thanksgiving feast is food combinations people don’t eat regularly.

People might eat stuffing as a side to pork chops and have roast turkey on a random March day but rarely put the two together and add cranberry and yams.

Please understand my feelings about mac and cheese. I don’t hate the dish. I’ll never order it, make it, or eat it, but I don’t hate it.

I don’t look down upon people who love the dish and eat macaroni and cheese throughout the year.

It’s just not a Thanksgiving side dish.

Unless you’re a goddamn hillbilly or come from a family of piss poor cooks.

The true origin of mac and cheese hitting Thanksgiving likely comes from incidents of people not liking the Thanksgiving meal at all. People need options when they sit down to a feast they don’t care for in the least.

I understand people will dress up macaroni and cheese on Thanksgiving with different toppings, mix in several other ingredients, tinker with the cheeses, sprinkle in bacon and onion, and do anything to mask the fact they made a cafeteria staple for the most important eating holiday of the year.

Many of the Thanksgiving recipes for macaroni and cheese that I saw online suggested adding cauliflower for an extra special culinary dumpster fire.

If I hosted a Thanksgiving dinner where guests are requested to bring a side dish, and someone showed up with mac and cheese, I’d immediately assume the person either hates my guts, or they suck at cooking. Maybe they’re just incredibly lazy or unimaginative.

Macaroni and cheese at Thanksgiving are permissible if most humans in attendance are under 12 years old. The “ketchup on hot dogs” crowd.

Related – if you’re an adult who puts ketchup on a hot dog, you’re automatically disqualified from having any opinions on food. If you’re like Patrick Mahomes – a grown man who openly admits to putting ketchup on turkey and ham at Thanksgiving – you’re probably a serial killer in your spare time.

The fact that macaroni and cheese made it to the final four of our Thanksgiving food showdown is an unmitigated disgrace.

The Final Four has arrived and things aren’t by the chalk. Which two foods will advance to the championship, and will they be your favorites?

Only one way to find out! Vote! 🗳👇 pic.twitter.com/p5IMwYdhBb

If your family eats macaroni and cheese on Thanksgiving, you’re a hillbilly. And that’s fine.