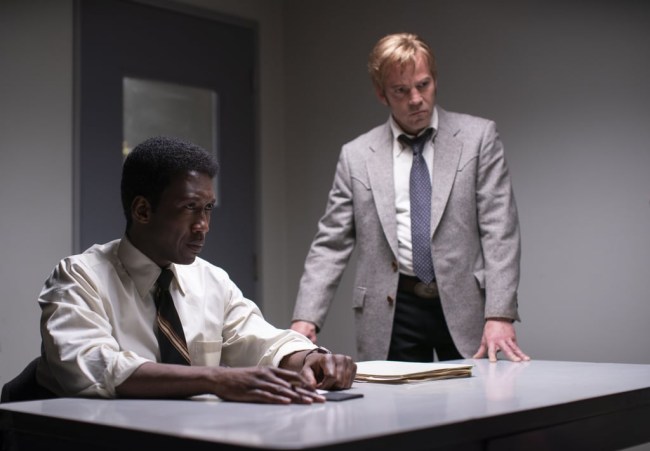 Mahershala Ali, born Mahershalalhashbaz Gilmore (truth), has had a successful run in show biz since he appeared in The Curious Case of Benjamin Button in 2008, his first major film release. The apex of Ali’s career to date came in 2016, when he won the Academy Award for Best Supporting Actor in the widely lauded drama Moonlight.

With one of film’s most prestigious honors on his shelf, the 44-year-old is a bigger draw than ever. And he knows it.

In a recent Actors on Actors Variety interview, Ali claimed that he received offers for Green Book and True Detective within days of each other, but locking down the role of state police detective Wayne Hays in True Detective took some finagling.

Ali revealed that showrunner Nic Pizzolatto initially wrote Ali’s part for a white character, as white men held most of the authoritative occupations in the 60s and 70s.

“True Detective was written different. The lead was white, and the other cop was black. And once you see the show, you’ll see that is different from the other seasons, in that the lead character, he’s at the point of the arrowhead,” Ali said.

“I could’ve played that second lead, that supporting career. But in my mind, I was like, ‘I’ve done this my entire career though. I’ve never done that,’” he said. “At that time, I’m 43 years old. If it don’t happen now, it really may not happen.”

To convince Pizzolatto to rethink the his vision of the show, Ali showed him photos of his own grandfather, a black state police officer in Arkansas.

“I went on my phone; I’m hitting up some cousins and whatnot. And they send me some pictures of my grandfather in the state police officer uniform. So I texted them to [Pizzolatto]. And I was like, ‘See, we existed in this space in the ’60s, in the ’70s, [as] state police officers. This is in Arkansas.’”

Ali said he told Pizzolatto that “we don’t have to beat them over the head with the race element,” but he urged the showrunner to think about how depicting racism in those times could add profound layers to the story.

Hays will play a state police detective from northwest Arkansas tasked with solving the grisly abduction of two missing children in the heart of the Ozarks. The second official trailer for True Detective season 3 dropped this week and it looks amazing.