Man Tried To Shoot Protesters With A Bow And Arrow, Gets Beat Down, And Has Car Lit On Fire 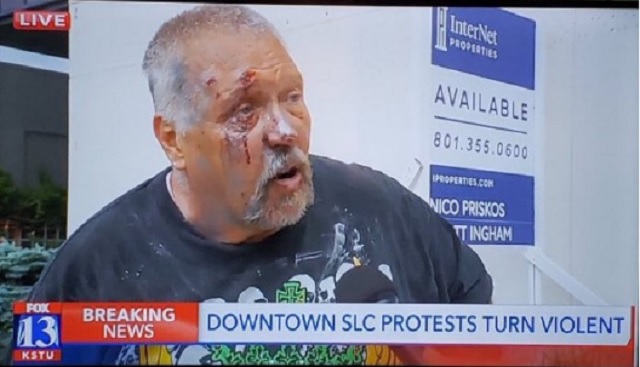 Following the death of George Floyd at the hands of Minneapolis police officer Derek Chauvin, protests have taken place in several cities across the country and we’ve seen some wild scenes take place.

During the protests in Salt Lake City, Utah on Saturday, a man decided it was a good idea to start shooting protesters with a bow and arrow. The man was immediately swarmed and subdued by protesters.

A civilian brought a hunting bow to the #slcprotest and began shooting it at protesters. pic.twitter.com/UYZFtISb9I

WELL THIS JUST HAPPENED IN DOWNTOWN SALT LAKE CITY. fucking bastard deserved it. WHO THE FUCK DOES THIS?!
VIDEO CREDIT : @jaxcino on LIVE IG #slcprotest pic.twitter.com/ZZvznaCUcM

The man’s car was turned over and set on fire by protesters moments later.

The man in the overturned car pulled up with a crossbow and was attacked by Salt Lake protesters. pic.twitter.com/NsU54XBPma

The SLC police retreated and allowed rioters to light the man’s car on fire. pic.twitter.com/aXhBhXQODO

The man did not appear to get arrested but he wasn’t looking very good when interviewed by a local TV station.

The headline should read “man gets out of his car and attempts to murder protesters with bow and arrow, hilarity ensues” pic.twitter.com/XSkrN9rN5s

DUDE WITH THE BOW AND ARROW DID NOT GET ARRESTED. pic.twitter.com/qmpTybiCaS

Nobody told him to act like Hawkeye from Avengers and launch an arrow into the crowd. When you do clownery, the clown comes break to bite. https://t.co/JBjvpmtcvB

Update: The man claims he was getting beat up for yelling “All Lives Matter” before pulling out his bow and arrow.