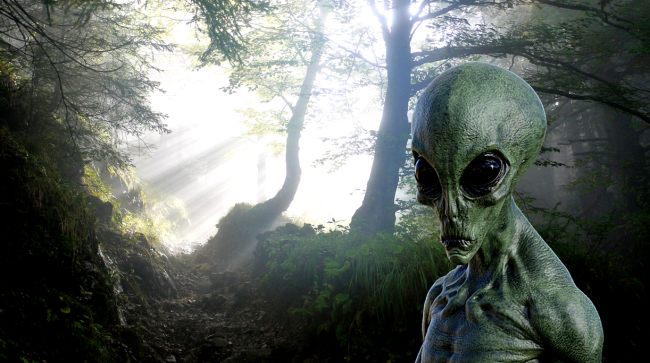 A childhood encounter with what he believes was an extraterrestrial being changed Ben Walgate’s life forever.

As a result of that encounter, the 35-year-old UFO expert from Malton, North Yorkshire in the UK has now spent years searching for answers.

Walgate recently shared his story with the Mirror.

As a child, he was returning from a camping trip as a Cub Scout when the bus pulled over so everyone could get off and stretch their legs.

During this break, Walgate says he wandered up a small embankment where he could see a ramshackle outbuilding in a clearing in the woods.

But suddenly, around 25 metres to his left, Ben said he saw a spindly “green creature” with a tiny head, standing on two feet and well over six feet tall with oversized limbs.

He described it as walking with a “stoop” as if struggling to stand or clumsily trying to keep a low profile.

“The wooded area wasn’t that dense so I got a good look at this thing. It might have only been a few seconds, but we made eye contact, it had black eyes,” Walgate told the Mirror.

“This thing was out of the ordinary, it looked at me I looked at this thing.

“It was definitely not of this Earth. It was such a weird vibe. Its head in proportion to its body was tiny,” he continued.

“It’s not like the stereotypical alien with the grey skin and the big black eyes. This thing was more lizard. I’m not saying it had scales, it wasn’t snake-like.

The “lizard”-like alien “was just other-worldly, it shouldn’t have been walking on two feet,” said Walgate.

He has spent much of the last five years trying to pinpoint the exact location where this alien encounter took place, but so far hasn’t been able to pin it down.

Walgate has been chronicling his search for the location of his childhood encounter as well as other extraterrestrial investigations he has undertaken on his YouTube channel.

He says that when he first began his search for answers he discovered that there were online groups of people who claim to have had similar experiences to his, especially around the North York Moors.

“I’m getting out there and investigating some of these areas and following up on some of the stories that people have shared,” he said.

He compared it to how the Panda only became known to westerners in 1869 when French missionary Armand David brought back an intact carcass from China.

Due to its sparsely populated habitats, it simply remained out of sight for a long time.

Ben said “it wouldn’t be hard for something to stay hidden” on the moors either.

“If there are intelligent beings out there, and I’m not saying there are, but it’s highly likely there are, if they were coming here for some reconnaissance or research, it wouldn’t be difficult in a place like the North Yorkshire Moors to stay hidden,” Walgate said.