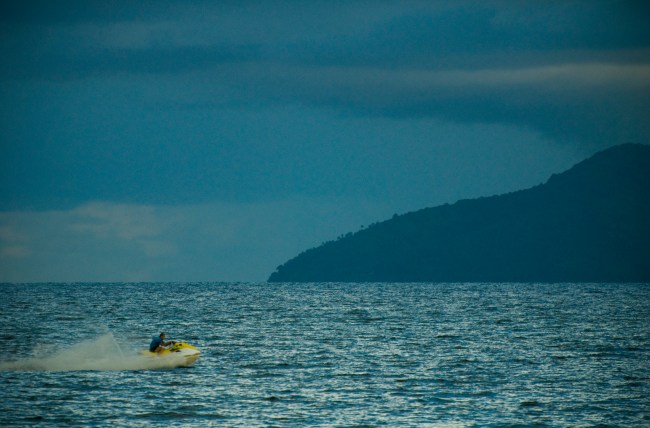 I will say that the only thing worse than being alone during COVID, is living with someone. Just kidding babe, what’s for dinner? No you pick. I’m cool with anything. It really doesn’t matter. I think we should see other people.

A part of my heart bleeds for 28-year-old Dale McLaughlan, who was arrested on Sunday after he entered the Isle of Man from Scotland through the sea route, violating the island’s COVID-19 laws restricting access to non-residents, according to The Independent.

His mission: meet up with his girlfriend, Jessica Radcliffe, who he had met in September after he was given permission to work as a roofer on the island for four weeks.

McLaughlan purchased a jet ski, despite never in his life driving one, to travel the 25 miles, a journey he expected to take no more than 40 minutes. Choppy waters had something else to say about that and the journey ended up being FOUR HOURS, leaving his gas tank with no more than 10 minutes more of fuel.

“The craziest thing is he can’t even swim,” a family source told the Daily Mail about McLaughlan, describing him as a “nice lad, but thick as a brick.”

Absolute legend of a Scotsman crosses Irish Sea to see girlfriend and gets jailed…on a JET SKI HE BOUGHT FOR THIS SOLE PURPOSE. He also got covid tested before his trip and legally tried to apply several times. Someone snapped a photo of him landing. Isle of Man = snitches den pic.twitter.com/9gUWLFFECD

That was just one leg of the journey, as Dale then had to walk another 15 miles to his girlfriend’s home in Douglas, Scotland.

He gave the police his girlfriend’s address as his own on Saturday and the two visited two crowded nightclubs. Next day, he was arrested following identification checks.

McLaughlan’s defense attorney claims he was living with “depression” due to his inability to meet his new squeeze. In America, we call that “blue balls.”

Deputy High Bailiff Christopher Arrowsmith said McLaughlan had made a “deliberate and intentional attempt to circumnavigate” the border restrictions, potentially putting the community at risk.

BBC reports that McLaughlan admitted to arriving unlawfully on the island and was jailed for four weeks. FOUR WEEKS. In the name of love?! What is this 1930s Germany? Sheesh.

Bro. I’d risk drowning for her too.