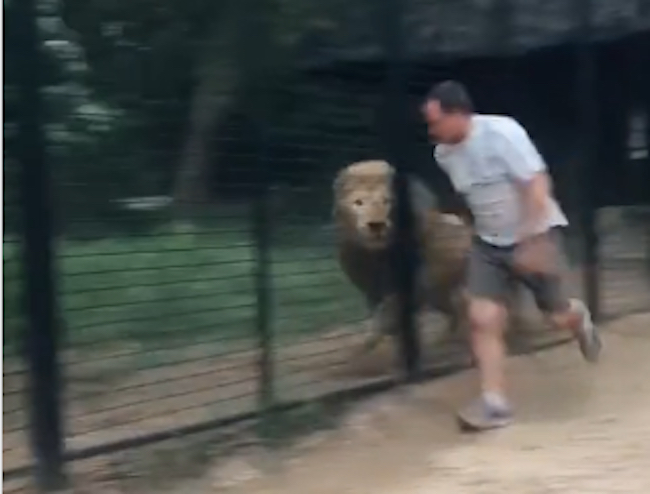 Every man likes to think he’d survive out in the wild.

Sure, a person might last for a little while, but eventually, the elements or the animals would win.

This video proves that some guys wouldn’t last as long as others.

Watch this man with as much athletic ability as Darren Rovell try to “juke” a lion in a cage.

Honestly, the lion is toying with the man. At no point does the animal try to lunge at the target. All it would take is one swipe of the paw to knock the guy into next week and the lion would end this silly game.

The commenters we’re all in agreement that the guy would have been cat food if it weren’t for the steel structure keeping the beast at bay.

Lion out there side shuffling with him bra it’s a wrap, only thing you running into, is it’s mouth.

to be fair. That is one of the most unathletic men I have ever seen

Nah he broke his ankles with that one move pic.twitter.com/2iEyiuRiv8

All yall in here cappin. Yall not outrunning no animal with 4 legs lol

That Would Be Funny As Hell If Gate Just Mysteriously Opened

i don’t know about y’all but he not catching me, i’m built different

Even Chad Johnson chimed in on the video.

We gotta get the lion with @FrampCamp or @The_FootDoctor, bad technique, gotta drop weight and transition. Terrible footwork 🤦🏾‍♂️ https://t.co/tDbitmmXAt

Even the best receivers in the NFL couldn’t outrun that beast.