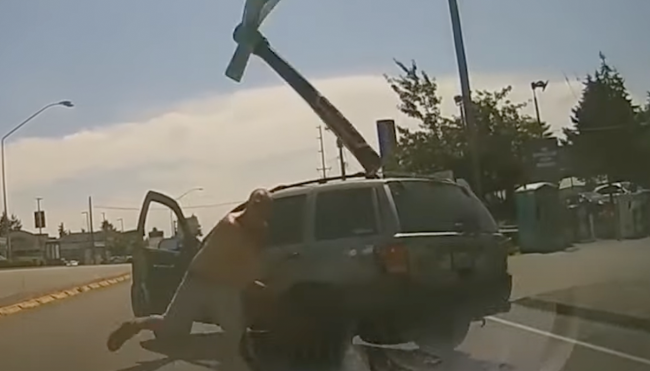 You may need a license to legally operate a motor vehicle, but you wouldn’t know it based on the truly baffling behavior of far too many drivers you encounter on the road on a disturbingly regular basis.

When that happens, it can be very tempting to lay on your horn, flip someone the bird, or roll down your window to unleash a string of profanities to make your displeasure known. However, you never really know how the other person is going to react, as there are also far too many people out there who won’t think twice about going to some pretty extreme lengths to defend their honor even if they’re objectively in the wrong.

One person in the state of Washington recently learned that the hard way after somehow attracting the ire of another driver in King County, as WSVN reports they found themselves being honked at and harassed by a man behind the wheel of a Jeep after merging onto the highway. After pulling off an exit in an attempt to deescalate the situation, they were treated to the polar opposite outcome after the man cut them off, hopped out of the vehicle, and chucked a damn axe through their windshield before driving away.

Police say they were able to track down the axe-thrower a few days later after discovering he was in jail on unrelated charges, where they tacked on some more as a result of what went down during the road rage incident.