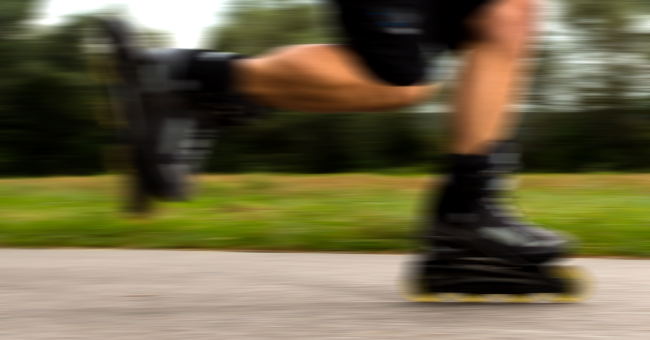 A man has gone viral on TikTok for racing away on rollerblades at a very high rate of speed from a police car that was in pursuit of him.

Very little, as of now, is known about the man, but a TikTok video of him posted by Breyley Stephenson (@breyleystephenson) on TikTok has now been viewed over 7.5 million times and garnered a very impressive 1.1 million likes.

In the brief video, we see our man absolutely blazing down a street, blowing past a couple of people who were filming him on his rollerblades. Closely following him, in pursuit it appears, is a police car with its cherries on.

It apparently took place in Door County, Wisconsin where there is a state law that prohibits skating on city roadways.

Accompanied by the Warren Zeiders song “Ride the Lightning,” the short video has also gathered up over 9,000 comments.

They breed different in door county

Stephenson later provided an update in the comments.

“Update: they’re making tee shirts that say ‘let spidey blade’ to bring attention to the ordinance of in-line skating on roadways,” he wrote. “And spidey said, ‘he couldn’t hear the cop because he was listening to Miley Cyrus.'”

“Did not think it could get more ridiculous but you proved me wrong,” a viewer responded.

Someone claiming to be the rollerblader’s cousin also chimed in, writing, “Dude, that’s my little cousin, no joke. I recognized him right away.”

She later added, “My friend sent it to me and right away, I’m like, no, that’s Adam.”

He eventually did join TikTok with the handle @adamdeerbear after receiving numerous marriage proposals from some of his new fans.

“I’ve known this kid [for] some time now and I’ve never seen him without skates…guess they came in handy after all!” another viewer wrote.

Even Warren Zeiders himself commented on the video, writing, “A True Outlaw 🤘🚨😂.”