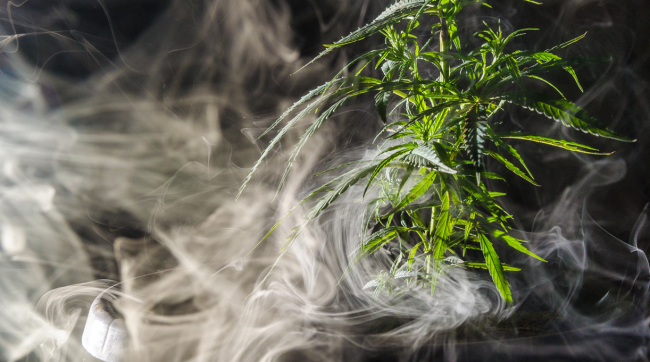 Talk about getting a contact high. A humongous cloud of marijuana smoke covered a Colombian town when police decided to burn more than 1.5 tons of weed and the winds shifted.

Citizens in the town of Bello, a suburb of Medellin in Colombia, were forced to evacuate several towers in the area due to the cops smoking out much of the city.

Hard to tell who's "winning" the war on drugs in a Colombian town that's now completely shrouded in marijuana smoke, and it's all because the cops lit up a huge pile of pot at the wrong time. https://t.co/6Jxd1pqc4z

A total of 1,678 kilograms (3,700 pounds) of marijuana were seized in a massive bust by local law enforcement on July 11.

“Once again we show that we are #Relentless Against Crime, this time against crime in #Bello,” tweeted the Aburrá Valley Metropolitan Police.

“Several subjects were suspiciously unloading several boxes from a van-type vehicle and directing them through some stairs to a house, for which the quadrant of this area was immediately moved, in order to corroborate what was being indicated in the information provided,” read a statement describing the bust.

“Upon arrival at the scene, the police professionals, who observed a vehicle and several subjects fleeing, leaving 20 abandoned cardboard boxes which contained a marijuana-type substance that were secured and seized by the police professionals. When they were carrying out this procedure, several shots were heard from some criminals, who tried to prevent the procedure in which 475 kilograms of marijuana were seized.”

In a second seizure operation performed that evening, police, “observed when several subjects who were on some stairs, noticing their presence, began to flee through a ravine. When patrolling in this area, the uniformed officers found a house, used as a warehouse, with the door open and a few cardboard boxes inside.”

Nearly four tons of marijuana have now been seized in Valle de Aburrá, according to authorities, 1,700 kilos of which were seized in Bello during this operation.

Many folks on the internet appreciated the police’s efforts to hotbox the town.

Man I wish I was there. Me and my boys would clear that air.

You know the fast food business is booming 💥 😋

Everyone in that town pic.twitter.com/obURqnZgdE