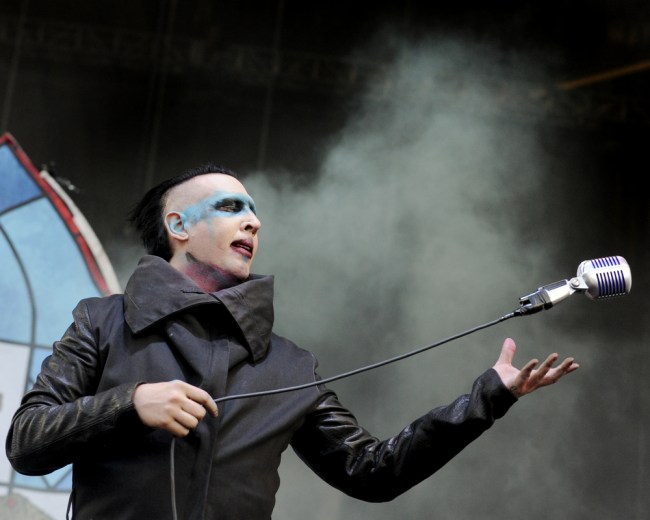 Marilyn Manson was forced to cancel his concert and was taken to the hospital on Saturday night after a stage prop collapses on him during his show in New York City. Approximately one hour into his performance at the Hammerstein Ballroom while singing his popular “Sweet Dreams (Are Made of These),” a large stage prop of two huge handguns fell on Manson. The prop crushed the 48-year-old singer, he laid on the stage for several minutes, and he was taken out on a stretcher. The severity of Manson’s injuries is unclear.

A piece of the set fell right on him 🙁 🙁 @marilynmanson pic.twitter.com/p6KQLyXUOK

“Manson suffered an injury towards the end of his incredible NYC show. He is being treated at a local hospital,” a rep for Manson told Rolling Stone.

@marilynmanson fucked himself up bad! Show was cancelled. pic.twitter.com/dAUOtR4dH5

First picture of Marilyn Manson on his way to the hospital. pic.twitter.com/wBHMmKUJsC

This is the second concert mishap in as many days. During Manson’s concert in Pittsburgh on Friday, he fell off the stage during his concert. Manson was able to pull himself back onto the stage and told the crowd that he broke his ankle. He then proceeded to call his tour manager a “fascist.”